The reviews for the Edinburgh run of The White Rose:

It is Munich 1942 and terror has gripped the citizens of Nazi Germany; this is the tale of the people who refused to be ruled by fear. A true story, it is based on the beginning of the White Rose Nazi resistance movement, and is beautifully acted, the tension so well evoked that one terrified audience member cried out when the young movement's leaders decide to fight the noble cause that will lead to their execution. However, a mere forty minutes of a story with such human anguish and historical intrigue felt overly fleeting. Nevertheless, it is testament to the skill of this talented company that it was torturous to be left hanging just as the action began, knowing the tragedy that was to come.
tw rating: 4/5

Yesterday, I gushed with admiration of MMVI Theatrical’s psychological tour-de-force ‘The Poisoner’s Tale’. I suggest loyal readers gird their loins while I prepare to do the same for the show they are playing in rep therewith – Melanie Boyce’s historical drama and timeless parable of ideas over self-interest ‘The White Rose’. 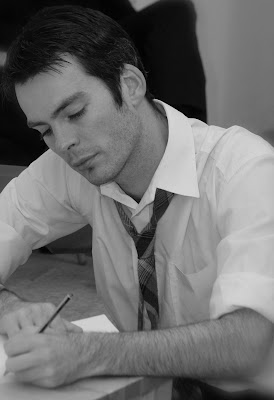 The show is inspired by the true story of The White Rose movement, devised by four friends – Hans Scholl, his sister Sophie, Christoph Probst and Alexander Schmorrel – who distributed inspirational pamphlets throughout wartime Germany urging opposition to the Nazi regime before paying the ultimate price at the guillotine on being discovered.

Boyce has decided to deal with the story’s origins rather than its outcome, ending at such a point as to allow the audience to experience in the hours after it ends the slow-burn of personal decision if faced with the question “Recant or die” and doing so with the bold but blisteringly effective simplicity that MMVI Theatrical have made their trademark at this fringe.

The use of protracted silence at the beginning as Hans and Alex sit studying and writing was potent without undue discomfort – it was not the silence of ball-busting import or the silence of ball-busting forgetfulness – it was a measured, well-executed (if you’ll forgive the term) silence that bespoke calm and comfort between actors/characters and engendered a feeling of intense interest in them in the audience that was a perfect hook to the start of play that would require much of the audience’s broad emotional palette.

The same cast that so expertly rendered ‘Poisoner’s Tale’ yesterday are back and in as good a form, though in a different mode and character style. Light-hearted banter and genuinely sharp humour turns sharply to intense seriousness and was effected with grace, skill and emotional athleticism. They created palpable tension without the melodrama that could so easily arise from a story of such swift and terrible power and built up the electric charge that bristles throughout by the time Sophie delivers her final, chilling line.

The notable thing with cast mentions on this occasion is that one can say that each actor had their chance to stretch their legs in a different direction and prove their worth in terms of versatility.

David Black, the caustic D of ‘Poisoner’s Tale’ makes the role of Hans Scholl his own – a steel core of self-knowledge, responsibility to his sister and absolute devotion to his cause is coated with a measured, calm, personable disposition which nevertheless did not mask his inner fire, gently painting a character portrait of nuanced tones.

Mark Collier shed the more pronounced bittersweetness of C in yesterday’s show to allow a greater stridency to come through in his portrayal of Christoph – commanding an easy authority and a gently noble regard of torn sensibility as the idealistic if necessarily cautious family man and crusader.

In the brimstone left behind after his volcanic performance yesterday, Brogan West has found a rich vein of acidity (in wit and bluntness) to add to his role as Alex. Alex – the one whose words need watching – was portrayed with a just fire that burns with a sense of impatient frustration, and in a very well-rounded manner for a part which a lesser actor could so easily have made worryingly two-dimensional

Natalie Wakelin carries a heavy burden in this show – not only closing the show in a manner which commands huge respect, but also showing the development of Hans’s younger sister from bright-eyed new student to key proponent of peaceful resistance with clear storytelling capabilities and great poise, coming firmly into her own in the second act and closing with the set jaw and pride of a ship’s figurehead, and perfect judgement of the emotion and tone needed.

With calm assurance, in a mode of performance where intentions were stated clearly and robustly without recourse to melodrama, the team at MMVI Theatrical have created two shows which link together well while retaining their own identity, the overlaps interesting without being laboured. Above all, director Melanie Boyce and her cast have shown, especially through ‘White Rose’ that, in instances where ideas matter, anger can be a virtue, frustration a catalyst and justice a matter that requires idealists to effect its truth, even in the hearts and minds of others. Of course, nothing comes for free – here, the price paid is the price of heroes. How fitting that they were so heroically portrayed.

Theatre Wales doesn’t offer star ratings for shows, but I think in this case, we can probably chuck MMVI Theatrical in a minor galaxy and let them take their pick. In the meantime, someone give them a tour, there’s good chaps.


What must it have been like, to live in Germany during the second world war but to disagree with the actions of the regime? This high quality production gives us a stunning insight, with the cast creating a strong atmosphere of tension. This excellent production deserves a larger audience. 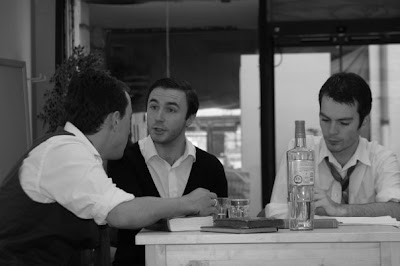 ...as above it does leave you wanting more...but that must be a good thing. The pace is superb winding the tension up like a spring until the finale. The space is intimate - you almost feel as if you are sitting at the table. The writing was taut - not a wasted word - well worth seeing.

Posted by Dave at 10:00
Email ThisBlogThis!Share to TwitterShare to FacebookShare to Pinterest
Tags: Acting, Reviews, The White Rose