Here are various reviews for The Poisoner's Tale:

"Someone whispered poison in his ear, now it's spreading". The poison may be spreading but so should the praise for this outstanding, thought provoking and superbly acted production. It's quite uncommon to form attachments to nameless characters, but the beautifully-crafted monologues are performed with such passion and sincerity that one cannot help feeling engrossed as their language and mental states evoke a devastating slide towards destruction. A fine balancing act ensues between the real and surreal elements of the play, prompting questions regarding the force of ideas and the venom with which you should act upon them. As the wine flows and the debate heats up, the question is asked: would you ever die for your belief in an idea?
tw rating: 4/5

As an arts resource, Theatre Wales has always prided itself on covering the best of theatre from within and travelling to Wales. However, two products of an Aberystwyth-based theatrical education, Melanie Boyce and Natalie Wakelin, under the aegis of the company MMVI Theatrical, have taken two new plays, the product of their own separate and collaborative writing and Boyce’s direction, to the Edinburgh Fringe in a move that puts a new mark on the Fringe and a new gloss on how we look at human nature and emotion.

The first of these – Wakelin’s “The Poisoner’s Tale” (I will cover its sister show – “The White Rose” tomorrow) is a theatrical banquet: rich, meaty, gruelling in its intensity and ultimately highly satisfying, despite the necessarily stomach churning journey that it sends its audience on. 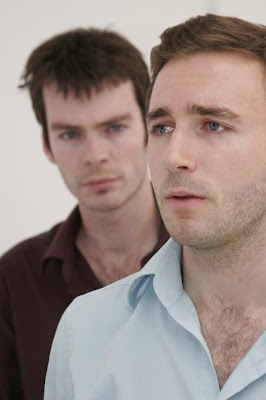 The plot, such as it is, is fairly simple to relate – three friends, only named B,C and D, attend a dinner hosted by a fourth, A, in order to discover the root of his increasing depression. However, the ‘poisonous thought’ which they uncover spreads its venom throughout the group and an emotional and linguistic breakdown is unleashed.

Wakelin’s script is by turns highly stylised and grimily earthy, but these shades and tones, which could jar if read on paper, becomes immediately normative because of the easy interaction of a staff comfortable with each other as they strip back layer after layer of unease towards the barnstorming climax. Word association games, which arrive unannounced, add to the polish of the script, even if a lesser company could make them tremendously awkward. The facial expressions of all four – Brogan West as A, Wakelin herself as B, Mark Collier as C and David Black as D – are very fine, acting as both mask and revelation throughout, perfectly embodying C’s speech on the delicacy of colour in life.

Indeed, all this colour emerged in a potent, mind-embracing spectrum in all the aspects of the performance. There were moments which grudgingly accepted a victory of silence, while, later, as A’s mental state is exposed, noise – his own and a conversation-drowning, pre-recorded variety, triumphs over the expression of ideas and ideals which Wakelin has propounded with a masterly grasp both intellectually and artistically.

This is a show in which the script is the star, but to allow that star to shine, one needs equally scintillating performances, and all four actors glittered equally, under the expert direction and discerning eye of director Mel Boyce.

Collier gave a performance that defined ‘bittersweet’ – his lightly-handled (but not lightweight) responses added colour without being overpowering and was a finely-placed balance to other performances without being subservient to them. Wakelin’s B retained, even in her more painful moments, a great elegance amid existentialism, making her point without resorting to hauteur.

Black’s D contributed richly to the humour of the piece – a humour which performed a complex and delicate dance on a shiny knife-edge that reflected the best and worst of human nature. However, his exposition of more darkly goading potential and his descent with the rest of the characters was also equally well-portrayed.

Brogan West, as the originally-poisoned A, was a whirling, mesmerising force throughout, gently percolating before a Vesuvian eruption, spreading to the rest of the cast, which was lung-draining to watch. Never was horror more normalised, never was profanity more poignant than in this show.

We live in a culture where the Arts are under constant threat, yet weighty and revered companies always state the need to promote the very best in new writing. Let them look, let them all look, with open minds and chequebooks, to MMVI Theatrical’s work, starting with ‘The Poisoner’s Tale’. After all, they have until the 23rd of August to go and see it at Venue 36.

Brutal and beautiful, vital and viral, ‘The Poisoner’s Tale’ holds in its hands both the world’s poison and its antidote. Which will you take?

These four actors were so believable at one point I almost thought I was going to join in on the conversation and add my two cents to the philosophical conversation. The very intimate, small theater adds to the fun of it all. We are definitely going to go back to see the White Rose with the same four actors. To me, this is what the Fringe is all about. 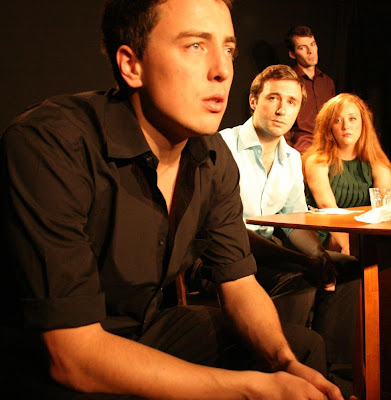 The cast from left to right: Brogan West, Mark Collier, me, Natalie Wakelin

This wasn't what i was expecting, but engaging all the same. The tension was palpable throughout, the characters well rounded. For me, to hinge the whole story on one proposition was a mistake. My psychological training tells me that one factor alone will not lead to such a breakdown. More could have been done to explore the other factors leading to the bleak ending. This play has potential and in a longer form, i feel would be more rounded.
Posted by Dave at 10:00
Email ThisBlogThis!Share to TwitterShare to FacebookShare to Pinterest
Tags: Acting, Reviews, The Poisoner's Tale