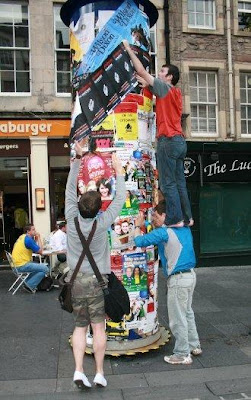 The Edinburgh Festival is currently in full swing and I'm not there. I could go, but I've already missed half of it.

Last summer, I was lucky enough to be cast in two plays performed there. Being there the whole month was a great experience. A strange bubble exists in Edinburgh in August and I found myself daily bumping into friends from London I hadn't seen for ages on the Royal Mile. I was more than a little spoilt by the experience and now I don't think I could go as a punter.

It was fantastic, a whole month of alternating between the two shows, flyering, postering (see above) and more theatre than you could hope to see in a lifetime. If you haven't been, go.

The Poisoner's Tale, written by Natalie Wakelin, follows a dinner party conversation between four friends. Four friends who probably should not be friends. I played D.

Melanie Boyce's The White Rose concerns the true story of a group of Munich students who ran a campaign calling for active opposition to the Nazis during World War II. I played Hans Scholl. As The White Rose is on the cusp of being remounted, it seemed like a good time to take a look at the reviews. Since The Scotsman chose to review both shows together I've posted it separately:

HERE are two plays performed on alternate days, linked by the same cast, the spread of ideas, and the application of free will. The White Rose is the more conventional, though aspects of the word association games played in its counterpart connect them. It's an account of the Munich philosophy students who opposed the Nazi regime with an anonymous leafleting campaign, and shows how the four struggled to weigh their consciences against the fatal consequences of the Gestapo discovering them. Alex is fired up for action, but family man Christoph counsels caution, even as Hans argues in vain to dismiss his sister Sophie from their inner circle. Caught between a fascist state and their principles, The White Rose's choice is no choice at all – recant their beliefs or die. Yet they retain a sense of purpose envied by their parallels in The Poisoner's Tale.

At a tense dinner party, B, C and D dispute the best approach for handling their host, A, prone to nihilism since the collapse of his relationship. C raises The White Rose's example and asks whether any of them would lay their lives down for a cause. Probably not is the implication, as A's brutal self-analysis begins to infect them all, forcing them to confront their trivial existences. But, while The White Rose derives authority from historical events and the sacrifice of its protagonists, the script of The Poisoner's Tale never convinces that the superficiality resides wholly in its characters. The abiding message is that the freedom to choose may be fraught, but get a grip, people have died for it.
Posted by Dave at 10:00
Email ThisBlogThis!Share to TwitterShare to FacebookShare to Pinterest
Tags: Acting, Reviews, The Poisoner's Tale, The White Rose