Last year I posted every time Dredd Alert covered a new strip. Then I went off on my sabbatical and such matters went woefully under reported.

A couple of months into the strip, Judge Dredd found himself with a robot servant who took it upon itself to look after him. Walter was the Judge's biggest fan and followed him to the moon and back, despite a lack of appreciation from Dredd. Highly strung and with a speech impediment that meant he couldn't pronounce his R's. He was often put in situations that left him very emotional, required the robot to rely on rhotacisms and scream "Dwedd" a lot. 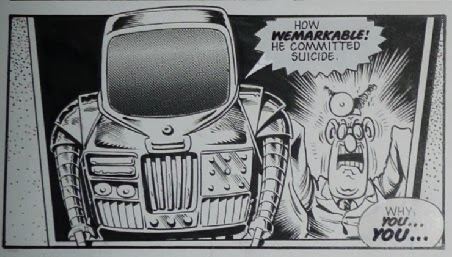 A couple of months after his first appearance, Walter got his own strip, largely comic relief but often with a surprisingly dark thread running through it, Walter The Wobot.
Posted by Dave at 10:00
Email ThisBlogThis!Share to TwitterShare to FacebookShare to Pinterest
Tags: 2000 AD, Writing