When I announced our engagement on here, I neglected to include any photographic evidence. It's time to change that. 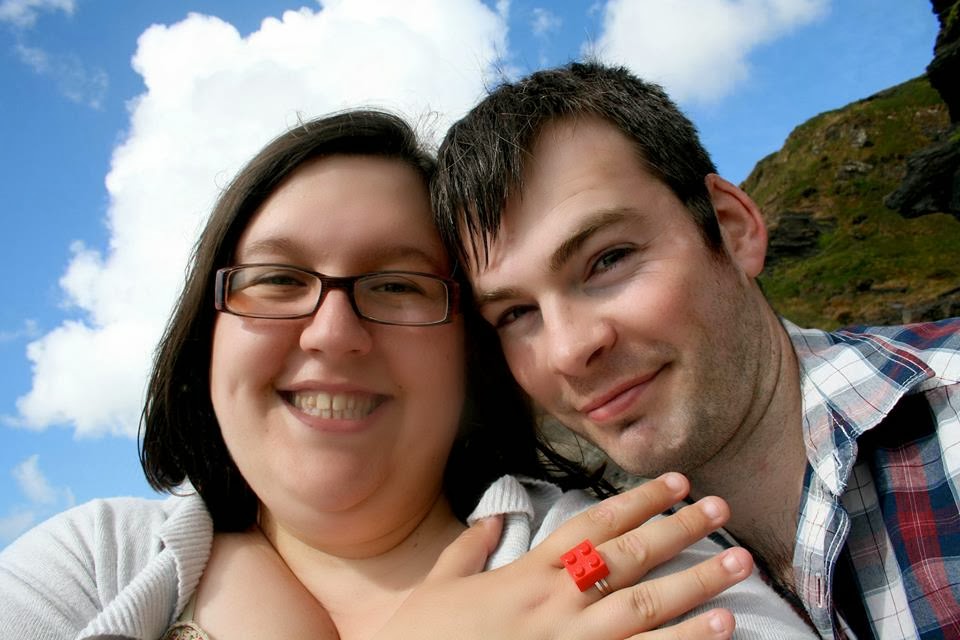 Nothing delays a proposal better than people saying things like "so when are you two going to take the plunge?" Sarah doesn't really wear rings, so working out a ring size was an initial hurdle. Naturally, I searched online for suggestions. The barmiest of which was to tie some string around your intended's finger while they were asleep. How terrified would you be if you woke up to the sight of someone stood over you with a ball of string around your digit mid-knot?

We had treated ourselves to a little holiday to North Wales and I went armed with an adjustable ring. I chose it very carefully. This was important. Eschewing precious stones I plumped for the red Lego brick. We had a wonderful time, but it was either raining or foggy much of the time and the occasion was never quite ideal. Then one day towards the end of the week it brightened up and the time just seemed right. I put the ring in my pocket and we ventured out for the day.

We visited an aunt that I hadn't seen since I was a baby. She commented that I'd grown. We had a lovely morning wandering around her garden and digging up her veg. Then we headed off intending to go to St. David's. We didn't get there. I can't remember why, but we decided on Little Haven beach instead. It was beautiful and not too busy. We walked the length of the beach and sat on the rocks. I decided now was the time and asked. Some people seem disappointed that I didn't go down on one knee. It didn't even occur to me. I asked, she said yes, nothing else mattered.

We took this photo on the beach moments after I popped the question, only later did we discovered we were in the appropriately named St. Bride's Bay.
Posted by Dave at 10:00
Email ThisBlogThis!Share to TwitterShare to FacebookShare to Pinterest

Congratulations! Lego brick - you are a lucky man to get off so cheap.

Aww that's adorable! You're right - all that matters is that you asked and she said yes. Congrats!

Alex, thank you. For the record the Lego was very well received, but if she'd been holding out for a big sparkly diamond then we'd be doing it for all the wrong reasons.

Ayjay, thank you. To each their own, but it was all the better to us for being a very private moment. Looking back, I think if I'd tried to get a marching band or ask in front of hundreds of people in a theatre or something then it would have been robbed of its simplicity.