So this is a bit of a first: a guest post. In a moment I'll leave you in the capable hands of Philip J Reed, whose own site Noiseless Chatter you should definitely visit. As part of a little cultural exchange, we sent each other books. I currently owe Phil a piece about Vineland by Thomas Pynchon and he has kindly written this about his experience reading Terry Pratchett:

On Reading Pratchett As A Massive Snob
by Philip J Reed, Noiseless Chatter

I'm a big reader. I almost never have less than one book in my docket at any given time, and often I'm juggling two or more. It's obsessive, I know, but few things in life give me anywhere near the pleasure of a great book. I find myself reading literally any time I find a free moment, and sometimes even re-reading the books I love, tracking down alternate versions as well, just for the chance to read through the same story while carrying around something with slightly different cover art. And unless I one day go totally blind, I can't imagine any of this will ever change for me.

But here's the rub: I'm fiercely territorial about my reading.

Because of that, some have referred to me as a snob. They're welcome to. Especially since...well, they're right. But there's a method to my snobbery. After all, reading is an investment. And though people suggest books to me all the time, and I'm also reading all the time, I can't unilaterally take everybody up on their recommendations. There simply isn't enough time. 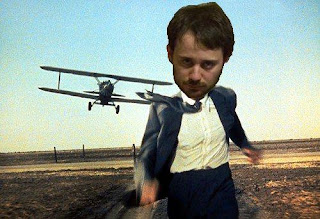 People recommend films to me all the time as well, and I watch those. They only take around two hours out of my day, so even if I end up disliking them greatly, there was very little time lost to the experience, and at least now I'm able to talk about it. Ditto music...a full album eats up around an hour and obviously a single song is even less. I can afford to take recommendations when it comes to music. At worst I never think about it again, but at best I find my horizons expanded to encompass a whole other branch of the artform I might never have encountered otherwise. I can watch as many films and listen to as many songs as I like before I die.

No. Books are an investment. If I read quickly, I might be able to finish a novel in a week. If not, or if it's particularly long, it may take me a month. Maybe more.

A life can be measured in minutes or hours of course...but it can much more easily be measured in months. And that means that every book I read, every book I have read, and every book I will read, represents a tangible portion of my life...and I won't be able to get any of that back. There's a very finite number of books I'll be able to read before I die. I don't know what that number is, but I know it's only getting smaller, and if I did know, I'd probably drive myself insane trying to decide what I need to experience before I go.

For all I know, I may not have enough time left to finish all the books I already want to read. And what about the books I want to read again? There are so many I've tried to enjoy, but failed. Should I go back? I did that a few times...picking up old books that left me dry the first time only to have them become, on a revisitation numbered among my all-time favorites. I can't imagine a world in which I didn't go back to give Gravity's Rainbow another whirl...but what else is out there? What books do I need to revisit before I go? What other books do I need to read for the first time, so I can be disappointed by them, in order to have a chance to read them the second time, at which point my life will be changed? I need more time. There are too many books...and not enough time.

So when I decline a book recommendation, it's because I'm being selfish, yes...but I genuinely do think I'm being selfish for the right reasons. I only have a relatively small number of books I can read before I die. I need to make them count.

Terry Pratchett, as readers of this blog well know, is an author Dave touts regularly. He likes Pratchett a great deal. Additionally, I like Dave a great deal, so I give his recommendations at least some more weight than I would most others. He's a funny guy and our tastes align on enough things that I'm happy to defer to his judgment when he assures me I'll like something. (And I do insist on 100% complete assurance.) It's because of him that I've read two Pratchett novels recently...one on his recommendation, and then the other on his dime.

I've tried reading Pratchett before. Around eight or nine years ago I read The Colour Of Magic, more or less on a whim. I was a big fan of Douglas Adams, somebody else I discovered on a whim, and had heard good things about Pratchett as well. Adams was far more of a humorist than a storyteller -- which is no way is intended, nor could I imagine it, to be an insult -- and he was enough of a humorist that his comedy became somehow profound. It helped to inform my worldview every bit as much as any piece of more serious literature ever would, and that's because the enjoyment he must have had in writing every page was almost tangible. He wasn't just telling jokes...he was creating a universe around those jokes, and having a ball doing it. There's a love there that other authors, including those more respected in literary circles than Adams will ever be, simply never attain. For Adams it came naturally. It was a remarkably impressive creativity that seemed to arrive fully formed, with Adams himself giving it only the smallest polish before it was ready to be enjoyed. And my young self enjoyed it quite a lot.

Perhaps because I had Hitchhiker's on the brain, I didn't bother to ask anyone which Pratchett book to start with...I just looked up the first title in the oppressively comprehensive Discworld series and bought that.

And I didn't like it very much. I think the only reason I finished it at all was because I had the book with me during Wheel Of Fortune tryouts, and that took literally all day. (I didn't end up getting picked for the show, but I did win a visor. It wasn't worth it.) I finished the book, and then only started on The Light Fantastic because I bought them both at the same time. I was feeling optimistic, I guess.

But life went on, and more and more people began to recommend Pratchett. I'd tell them I couldn't get into him, they'd ask me what I read, and I'd name those two titles which always made them shake their heads and say, "No, you need to read..."

(They'd finish that sentence with the title of another book, in case that wasn't clear.)

And this past Christmas, he bought me Small Gods. I opened the package and immediately decided that, in return, I'd write an essay about the book for his site. I'm currently breaking that promise.

Here's the thing: I really did intend to write an essay about Small Gods. And there's a lot I'd be able to say, particularly on issues of faith, and what it means to believe. And what it means to know. And what it means to understand. There's a lot of impressively complicated musing on the nature of humanity and power in that book, and a brilliant central relationship between an actual god and the only human being who believes in Him among a nation of those who just believe they believe.

But I can't write about it, because it's been too long. I blew through it. And the same thing happened with Night Watch before it.

Reading Pratchett is compulsive. Or at least it's proven to be lately. Remember when I said if I read a book quickly it would take me a week? Night Watch and Small Gods took days. Because on the first day I'd read around 10 pages, and enjoy it. On the second day I'd read 50, because all of a sudden it got really good. And on the third day I'd finish it, because how could I not?

When I read, I tend to choose books that look difficult. That look challenging and complicated. Books that seem as though they will work against me...books that I'll need to out-think, rather than just read. And because of that, I'd been holding off on giving Pratchett another time.

Sure, maybe I'd like him more if I started with better titles...but would it really challenge me?

And the answer is no. But the more important answer is that that shouldn't matter anyway.

Because Pratchett writes with love. He writes with a comic and ethical urgency. In both Night Watch and Small Gods, we're plopped into interesting situations and then almost immediately swept forward by a current toward some large and looming massive conflict. I want to look around. I want to spend more time with these characters and learn about who they are...but we need to keep moving, because the flow of time is strong and these things are destined to happen.

So I get caught up. There isn't time to look around and write essays and pull flowers apart to see what makes them bloom. Because things are happening...and if we don't keep moving, they'll pass us by.

I like reading Pratchett. And I like it because it's such a simple reminder of such a simple truth: there's love in a great book, and there's fun to be had. There's a world of challenge and complexity out there, and if all you seek is some intellectual chess-match then there's a whole wealth of writers who can coldly provide that.

There are relatively few that can elevate warmth and humor to an artform. And for decades, one's been doing it right under my nose. He's not exempt from criticism, but his methods might well be immune to it.

Because he's having fun. And he's causing us to have fun. And I'd prefer not to sully that with an essay.

I prefer instead to celebrate it with a love letter.

Thanks Terry. And thank you Dave. 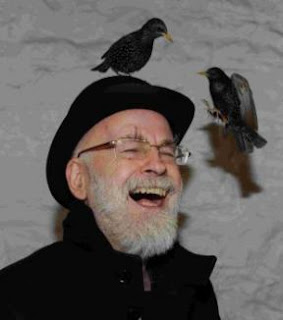 No, Phil. Thank you. Once again I urge you to pay Noiseless Chatter a visit and I'll keep you posted on my half of the bargain...
Posted by Dave at 10:00
Email ThisBlogThis!Share to TwitterShare to FacebookShare to Pinterest
Tags: Discworld, Phil Reed