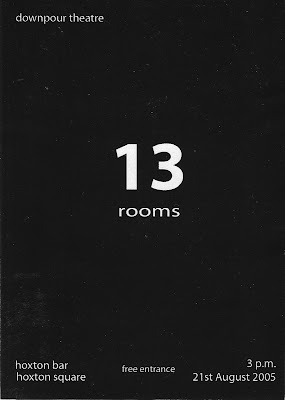 In 2005, Downpour Theatre assembled a group of people to write and produce a piece of theatre that would set the pattern for the later Behind The Bike Shed shows.

The idea was to create a sort of theatrical revue, written by members of the cast that was a mix of comedy sketches and more serious pieces. The resulting show was called 13 Rooms.

I wrote two monologues for the show. A piece called Patrick, which I was enormously proud of and I hope to revisit at some point in the future. It concerned an elderly man mourning his late wife. Irwin Sparkes did a fantastic job and hopefully in thirty years or so he'll be willing to do it all again.

The other monologue I wrote concerned a character called Jo and her thoughts about human nature based on her observations of traffic patterns. Zoe Alyssa Cooper was wonderful. I returned the favour by appearing in Zoe's piece, a duologue called Overheard. It was a philosophical meeting of minds across the generations. It was a privilege to do, got a great reaction from the audience and you could see the beginnings of what she would choose to write about in her subsequent plays. 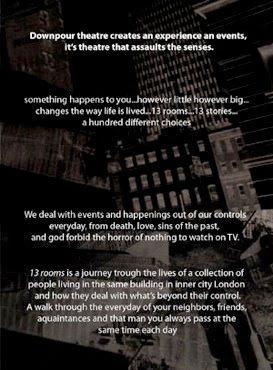 Mike Everhard wrote a monologue that involved finding God In My Pocket, which I had great fun performing and featured some choice swear words.

We rehearsed in a big posh house in London that someone had access to, I suspect without the knowledge of the owner. We watched UK premiere of the first episode of Lost and and we all slept over. We got up, rehearsed some more went to the venue and did the show.

It was the beginning of an incredibly productive period of my life in which I would write far more than I could have expected, work with some really great and talented people and astonishingly at no point was it difficult. I'm very aware that I say that as somebody who simply had to turn up with ideas, rather than wrangle with logistics. Anna Masing and Sarah Wills did a brilliant job of getting this off the ground, when the rest of us just had to get it off the top of our heads.
Posted by Dave at 10:00
Email ThisBlogThis!Share to TwitterShare to FacebookShare to Pinterest
Tags: Acting, Writing

Creating a play is a collaboration, which is so different from writing a book. (At least until critique partners come into play,)