Here's the first of my lists of observations about Shakespeare's plays as part of my new year's resolution. Due to unforeseen circumstances it's a couple of days late and that has made me reconsider slightly. I'm still going to work my through all of Shakespeare's plays, but now I'm planning on reading a play fortnightly rather than weekly. Those of you who enjoy mathematics will have realised this means it will take approximately twice as long.

Preconceptions: I’ve never seen a production of The Tempest, but I have seen Brent Spiner playing Data playing Prospero in Star Trek and that Forbidden Planet is based upon it. It's also a play which is referenced to estensively elsewhere: Miranda (left) is a revelation in Serenity and the name of a moon on which Rimmer started (and fled from) a barfight in Red Dwarf, Sycorax is the name of an alien in Doctor Who and “Brave new world” entered common usage and became the title of Aldous Huxley's Brave New World.

Act I, Scene I
The first stage direction is probably the definitive use of the word 'tempestuous' in the whole of English literature. I love the practicality of the Boatswain in the following exchange:

Boatswain: "Do you not hear him? You mar our labour, keep your cabins, you do assist the storm."

Boatswain: "When the sea is. Hence! What cares these roarers for the name of king? To cabin, silence! Trouble us not."

Gonzalo: "Good, yet remember whom thou hast aboard."

Boatswain: "None that I more love than myself." 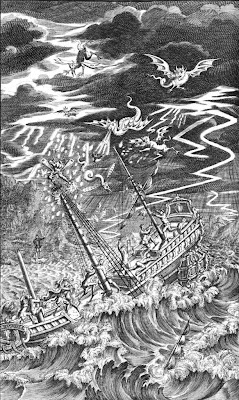 Act I, Scene II
Prospero's line "Hast thou forgot the foul witch Sycorax, who with age and envy was grown into a hoop?" is a great image.


Act II, Scene I
Sebastian gets all the best lines here "Look he's winding up the watch of his wit; by and by it will strike" and "He receives comfort like cold porridge"


Act II, Scene II
One of the things everyone seems to want to teach you about Shakespeare is his use of jesters, clowns and fools to comment upon the story itself, or simply to provide comic relief. Trinculo is Alonso's jester and from what I've read he isn't very insightful, apart from "Misery acquaints a man with strange bedfellows", nor does he seem particularly funny. In fact the opposite seems to be true, rather than being comedian himself he is Stephano's straight man, as seen in exchanges like this:

Stephano: "Here; swear then how thou escapedst."


Act III, Scene I
In a play full of magic it's odd that Ferdinand and Miranda falling in love at first is just that, especially with Prospero looking on and making asides like "Poor worm, thou art infected! This visitation shows it." I assumed that this infatuation was a trick and had to go back and re-read the scene to make sure I hadn't missed anything.


Act III, Scene II
When Caliban is wishing harm on Trinculo and compels Stephano to "cut his wezand with thy knife", I was glad some explanatory notes that revealed that wezand means throat or windpipe, rather than something lower down.
When Stephano asks "Dost thou like the plot, Trinculo?", it reminded me of Eric Morcambe asking his audience "What do you think of it so far?" 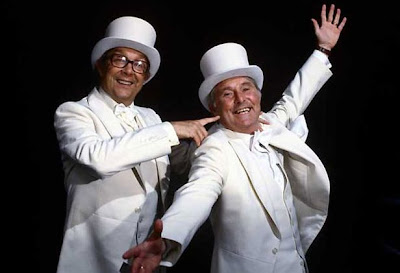 Act III, Scene III
Strangely while it's obvious that this scene is important, setting up the Alonso/Sebastian/Antonio plot strand and with the shapes bringing in the banquet and Ariel's use of a 'quaint device' to make the food vanish it also shows us Prospero's magic at its most explicit, but the first thought that occurred to me when I finished reading it nothing to do with any of that. In the last line of the scene Adrian says "Follow, I pray you", which reminded of several of the other scenes ending on a similar note. Either the penultimate or final line of most scenes has shared the same sentiment: "Let's take leave of him", "Come follow", "Lead away" and "So, king, go safely on to seek thy son", "O brave monster! Lead the way", "Lead, monster; we'll follow" and "Wilt come? I'll follow, Stephano". Is this running gag or just a convention to ensure the audience realises a new scene is about to begin?


Act IV, Scene I
Two of the subplots almost converge here, but in true farce fashion, they just miss each other. The section with Iris, Ceres and Juno despite being filled with some great dialogue and what Ferdinand refers to as a "magnificent vision", it is the stage directions which catch the modern eye: 'Juno descends [slowly in her car]', 'Juno and Ceres whisper, and send Iris on employment', 'Enter certain NYMPHS' and 'Enter certain REAPERS', which conjures up images of Prospero's island being filled with cars and unemployment, but at least it distinguishes those dancing from all the uncertain nymphs and reapers. This highlights the fact that the stage directions are far more prevalent here than in other works of Shakespeare that I have read.


Act V, Scene I
The showdown as everyone is brought together: Miranda and Ferdinand have their love acknowledged and accepted, Stephano and Trinculo are revealed to Caliban to be the idiots we all suspected, and Prospero forgives Alonso and they have a chat during which the latter says "I long to hear the story of your life, which must take the ear strangely". Well you and me both. Here's hoping the epilogue is chock full of Prospero's back story because it's something that has been intriguing me.


Act V, Epilogue
None of Prospero's biography is revealed in this last soliloquy, instead he says goodbye and "Let your indulgence set me free".

If I have one criticism of this play it is that Sycorax (below) seems such a well-drawn character that I would love to have seen her interacting with Prospero, Caliban and Ariel. 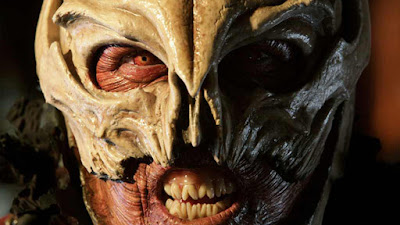 Reading Shakespeare returns in two weeks with The Two Gentlemen Of Verona.
Posted by Dave at 10:00
Email ThisBlogThis!Share to TwitterShare to FacebookShare to Pinterest
Tags: Doctor Who, Red Dwarf, Serenity, Shakespeare, Star Trek