I read your article with interest, but I have a couple of questions:

I see that you are a graduate yourself and of Oxford no less. Well done you. Who paid for that?

In your article, you are comparing future graduates to individuals making an investment that yields twenty times its original outlay. Presumably, you had a free university education yourself and have made a very good living since. What would be the equivalent ratio for your own cost of education to your subsequent earnings? Whilst asking students to pay so much for their education, it seems only fair to me that you pay for the education you yourself have received. Rather than some nebulous notion of graduates potentially earning "around £400,000", we have a concrete set of figures to work from: the financial history of Michael Gove MP. Does it not seem a hypocrisy that you are making this comparison when you have presumably experienced a better return on your investment than any future student could ever hope to?

With this in mind and regardless of which way the vote goes, I am challenging you and every other MP that votes in favour of the government's "new test for those considering a university career" and is themselves the beneficiary of a free university education, to put your money where your mouth is and donate at least the proposed £21,000 student debt of your own earnings to a relevant educational charity. 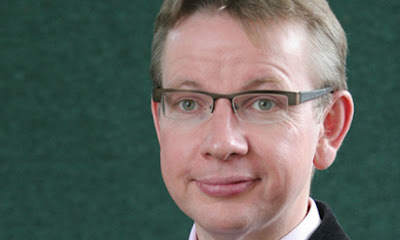 I received a reply, sadly not from Mr Gove hmself, nor one that is particularly pertinent to the letter I sent, but in the interests of clarity, here it is. It's too long for the comment box so I've split it in half:

Thank you for your email of 9 December, addressed to The Rt Hon Michael Gove, about the Government's proposals for reforming student finance. Your email has been passed to this Department as it has policy responsibility for Higher Education (HE). Ministers have received a very large amount of correspondence on this subject and in an effort to respond as quickly as possible the following paragraphs should provide answers to most questions. However, further information on the Government’s proposals is available from the web address that appears at the foot of this email.
It was only possible to offer HE free when it was open to fewer individuals. More people are now able to access HE than ever before and in England there were 1,556,525 undergraduates in 2008-9, in 1970 there were 433,000.

Many people are understandably anxious about what the proposals for reforming student finance might mean in terms of their plans (or their children's) to attend university. Ministers have, however, been very careful to make the new system both fair and progressive.

In the great majority of cases, students will not have to repay any tuition charges until after they have completed their degree and have started to earn an income. For the interim, they will receive a loan from the Government for the cost of their studies.

Most graduates will not repay a penny until they earn more than £21,000 a year (up from the present £15,000). The repayment terms are reasonable. The £21,000 earnings threshold will also be uprated annually in line with earnings from April 2016 (when the majority of students who commence a three year degree course in September 2012 will become liable to repay).

Graduates will have money automatically deducted from their pay at the rate of 9p in the pound, but only on income over the £21,000 threshold. A newly-qualified teacher earning £21,500, for example, would therefore face repayments of less than £4 per month.

Graduates who earn more will repay more each month, which is fair; and those who enter a more lucrative profession will pay a higher rate of interest, and ultimately contribute more to the cost of their university education. A graduate on £27,000 will initially make repayments of £45 per month.

In all cases, monthly repayments depend on income alone, so if graduates leave the labour market, their repayments will stop until they are earning again. If, after 30 years, a graduate's income has proven insufficient to cover the full value of the loan, the Government will write off the remainder. No other loans operate on this basis.

As further support to encourage bright students from the poorest backgrounds to apply to university, we will develop a new £150 million national scholarships programme, to start in 2012/13. The Department is working up details with students and university representatives, but Ministers intend that some students who benefit from the programme might receive free tuition for their first year or foundation year in HE.

As a result, it is estimated that the 25 per cent of graduates on the lowest incomes will actually pay back less than under the current system.

The final element of the proposed system is designed to improve the experience of students while they attend university. Under the new arrangements, more funding will be in the hands of students. Their choices will actually shape HE as institutions have to work harder to attract them, offering the knowledge and skills that students need to get ahead.

Universities that offer the best teaching arrangements and facilities – and can demonstrate that their graduates are successful – will themselves be more successful at recruiting applicants.

Furthermore, any university charging graduate contributions above the basic level must show how part of that extra money will be used to attract and support applicants from disadvantaged backgrounds.

Ministers are confident, therefore, that the new system will not dissuade young people from applying to university. Nor will it leave graduates saddled with unmanageable repayments. On average, a university graduate earns £100,000 more during his or her lifetime – net of tax – than someone who leaves school at 18. The new arrangements are necessary and fairer than the current system, and we believe that they will improve the experience of going to university.

Further information on the Government’s proposals for HE Funding can be found at: www.bis.gov.uk/student-finance.

Your correspondence has been allocated the reference number 2010/0103761. To contact the Department for Business, Innovation and Skills, please contact replies@bis.gsi.gov.uk.