Big Finish Productions are a company producing audio plays and readings based on 2000 AD, The Tomorrow People, Sapphire & Steel, Stargate, Robin Hood, Dark Shadows, Highlander & most importantly Doctor Who. Recently they offered a couple of opportunities to write material for them. The first of which was to come up with the story for a single 25 minute episode of Doctor Who featuring the Fifth Doctor and Nyssa, played by Peter Davison and Sarah Sutton respectively. The requirements were to plot out the story for a single 25 minute episode and a single scripted scene.

I am a massive Doctor Who fan. Massive. And as such I had to have a go at this, so I came up with a story and I was pretty pleased with it. I didn't win, but well done to Nick Briggs rhyming slang Rick Briggs who has the unenviable task of having us all compare his story to ours and judge him accordingly. I'm so pleased with the story I plan on re-writing it without including the TARDIS crew, so I won't be able to re-use the scene I wrote to demonstrate I could write scenes. So here it is... 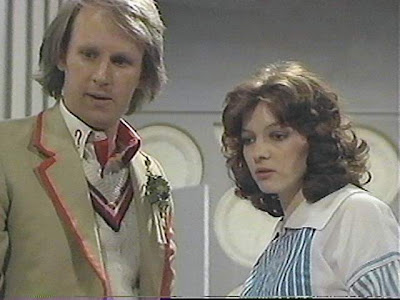 The TARDIS has materialised on a human colony planet called Ozakis. The Doctor and Nyssa head towards the nearest building: an observatory. The peace is interrupted by a group of colonists who have degenerated into mindless zombies on the rampage. The pair run to the observatory only to find it locked up. The colonists catch up with them and are about to…when the door opens with much shouting and firing of guns. The observatory crew ask the TARDIS twosome general knowledge questions to ascertain whether they are infected. The Doctor only gets one right, Nyssa doesn’t get any. The crew declare that they are uninfected but rubbish at trivia, and allow them inside.

DOCTOR: Yes, I thought they were going to-

McCALL: Is that Celery? It is! He's wearing celery.

DOCTOR: Hello, I'm the Doctor and this is-

HOPPER: Hello. Hello. It’s been so long since we’ve seen anybody new.

DOCTOR: The people outside, what happened to them?

McCALL: Does no one else care about the celery?

VALDEZ: The scanner detected three heartbeats and I only count the two of you. Where’s your friend?

VALDEZ: Not human, eh? And you?

DOCTOR: But immune to what?

VALDEZ: McCall named it ‘the Wrath’, but that’s just because he has too much time on his hands.

DOCTOR: So are you.

VALDEZ: The questions can wait, Doctor. Mister Hopper we’d better find a couple more plates in the stores. Mister McCall give these two a tour of the facility.

VALDEZ: (voice fades) I’ll be in the kitchen if you need me.

McCALL: Well, if you’ll follow me. It’s not much, but it’s ours.(voice fades) I like to call this the west wing, of course we don’t have an east wing but it’s aspirational…
Posted by Dave at 10:00
Email ThisBlogThis!Share to TwitterShare to FacebookShare to Pinterest
Tags: Doctor Who, Writing

I also applied for the opportunity and found your link through Big Finish’s forum. I think you captured the characters well and the dialog move along nicely. Are you going to post your story synopsis?

I'm not posting the story synopsis, because I've decided to write the story up as a full script, but not a Doctor Who script which is why this is here.