With Christmas on the horizon, I thought I'd take a look at the various Yuletide shows I've been involved with:

Way back in the Christmas of 1990, the children of Millbrook Junior School's fifth year put on a production of Charles Dickens' A Christmas Carol. The three classes were each responsible for one of the three time periods. Mrs Glencross' class were alloted Christmas Past and I played Mr Fezziwig. Definitely deserving of a special mention is Ross Sadler who played Scrooge throughout and thus had far more responsibility than any of the rest of us. 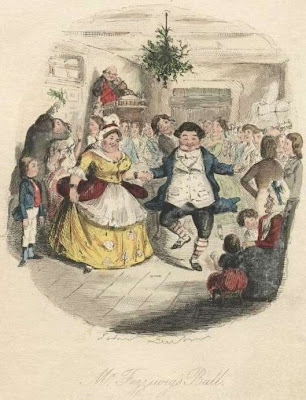 I think if I had to blame one moment for making me want to be an actor it was during this show. Mr & Mrs Fezziwig throw a party and one of our scenes ended with us clearing up after it. Mrs Fezziwig took her time and we ran out of dialogue before our exit, so I ad libbed. I was ten so I wouldn't have even had a clue what an ad lib was, but I made up a couple of lines to cover us to the edge of the stage. And they got a laugh. All right, so the audience was made up of the cast's family members but a room full of adults laughing at something you did on purpose is heady stuff for a child.

I was hooked.
Posted by Dave at 10:00
Email ThisBlogThis!Share to TwitterShare to FacebookShare to Pinterest
Tags: Acting