We Only Did What You Told Us To

I am not a poet and this is a fact I am all too aware of.

See how little of that rhymed?

However I have dabbled, and since I haven't been in a position to include Writing posts on here for a while I thought maybe I'd dust off this example of such dabbling. 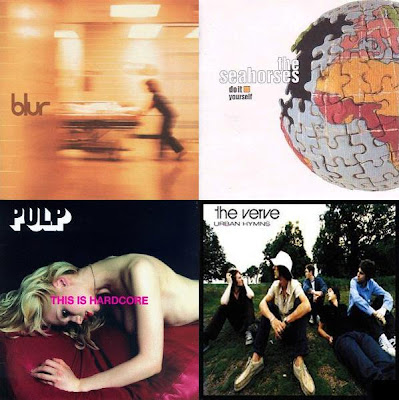 Picture the scene:
The year is 1998ish, Britpop has been and gone, Blur versus Oasis, Pulp, Jarvis Cocker briefly shared the stage with Michael Jackson, Supergrass, Placebo, Radiohead. All of it gone, and in its wake we are left with wall to wall boybands and the beginnings of the Reality TV dross we are so accustomed to now. Nothing stayed at Number 1 for more than a week and successes seemed scheduled. Then for a brief period, the bands of Britpop have a comeback in the offing. Fantastic albums like This Is Hardcore, Do It Yourself, Urban Hymns and Blur's eponymous fifth album are all released reminding us what we were missing and with them is a raft of new bands like Gomez, The Supernaturals, Catatonia, Cornershop and Ultrasound.

For a while there was hope. And then nothing. As good as their efforts were, the public just didn't seem to care. Incensed by this, I wrote a poem. Re-reading this for the first time in years I don't think Carol Ann Duffy's recent position is under any threat. I was also under the misapprehension that the various references to song titles and lyrics were much subtler. Subtle they ain't. Amazingly the world around me failed to change overnight. Here it is, but be warned, the world around you may fail to change overnight:


We only did what you told us to
We placed our hands and we sat down
We only did it because it was you
We did it all and without a frown
We woke Boo, to the tune of Song 2
We chose life and look where it got us
We lived common and fought Foo
We spent Saturday night alone on the bus

We, who were stupid girls and nancy boys
Loitered in spaces, opened wide with poise
Struggled with individuality
When we needed solidarity
We argued over the latest Blur versus
And hid from all the boyband curses
It was Tit for Tattva tit
We knew you’d save us from all this shit

No silver spoon and no life on a plate
Addicting ourselves, as our lives stagnate
Soul novocaine, grass that was super
Any old drugs that didn’t work
We’d kill time, while in a stupor
Columbia’s economy wore a smirk
They knew we’d buy anything
As long as it makes us sing

We got sorted and caught by the fuzz
That was the chemistry between us
We got our teeth kicked in as a warning
And then awoke unto our pure morning
Pushed into the realms of insignificance
Back from the limelight and magnificence
Breakfast was coffee and TV
Bought with peaceful profits, there are none

We turned to electricity
Do the best with what you’ve got and have fun
The sun hit the sky, the shit hit the fan
Who orchestrated this unwritten ban?
We looked to the world and got annoyed,
We looked to ourselves and got paranoid
We helped the aged and heard them moan
We looked to you when we felt alone

We were the mis-shapen, beautiful freaks
This is a low, there are very few peaks
Our whole lives ahead with destiny calling
Resigned to our lives, success rates are falling
We lived in parks, lapping up the rain
Learning to fly and spotting that train
Ignoring that vicar and part-time flasher
Our thirsts abated with brimfuls of Asha

We made it this far, to the end
On this learning curve, we’ve rounded the bend
We expected enlightenment and answers
All we got was cover versions and bad dancers
Our design for life was doomed to fail
Last reminders pile up in the mail
Heart-felt sun has now been stolen
A comeback tour by the sisters Nolan

We girls and boys we must unite
In the end it’ll be alright
Together we make our stand
Divided we would fall
We’ll issue our demand
Now This is a call
Rise up now, don’t take any of this crap
Unless you wanna endure another lap

This is amazing!. So many memories in song lyrics. Takes me back to 1998 and sixth form.

Deborah, do you recall?