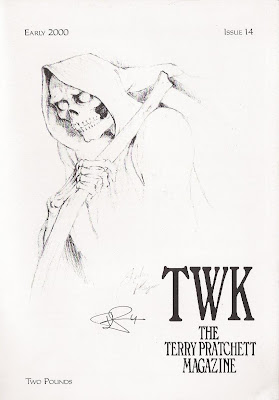 In 1998, I interviewed Dave Hodges, the falconer who inspired the character of Hodgesaargh in Terry Pratchett's Discworld novels Lords And Ladies & Carpe Jugulum. This interview was finally published in early 2000 in Issue 14 of the brilliantly named The Wizard's Knob:

How do you feel about being associated with a very unlucky and tactless falconer, namely Hodgesaargh?
I'm very happy to be associated with Hodgesaargh and I don't consider him unlucky or tactless, it's just that the best birds are often temperamental (the operative part of the word here is mental)

Come on then, give us your sales pitch: what is your book The Arts of Falconrie And Hawking about and why would a discerning Discworld fan want to buy it?
It is the first book written by a Discworld character, it does contain real useful tips about training and hunting with birds of prey. It benefits a charity that Terry is the patron of, also there are only 500 copies of the first edition and I will be doing a falconry display (yes, the real Lady Jane will be there) at the Clarecraft Event where a figure of Lady Jane and me will be launched. I have been working with birds of prey since 1981 and know a bit about them.

Terry has written a foreword for the book. Is that an indication of how long and how well you know Terry?
Terry wrote the 'About The Author' and I have met him at many events over the last ten years. He knew the Hodgesaargh name started long before Lords And Ladies.

Is the book written as if by Hodgesaargh or by yourself?
Hodgesaargh.

How did you come to inspire Hodgesaargh?
Terry knew I worked with birds of prey and had heard of Lady, he also knew of the reaction of people at conventions to seeing me arrive. I run a humorous database used to raise money for various charities and I'm always bullying people into writing things for it - people see me and say "Oh no it's Hodges - Aargh" and then run away. The database is The Real Hitch-Hikers Guide To The Galaxy and I've run it since 1986.

In Lords And Ladies Hodgesaargh is presented as a no-nonsense, seen-it-all-before tough guy whose only weakness is birds of prey.
Most people who keep birds of prey are rather single minded.

Is Lady Jady as cruel as some of the birds Hodgesaargh has to put up with?
Lady Jane is the worst.

Why did you choose The Orang Utan Foundation as the beneficiary from the sale of the books?
As Terry is the patron and he created me I thought it would be a good idea.

Will there be a sequel?
Yes, a revised and expanded edition should be ready in time for MilleniCon Hand and Shrimp.

Are you happy in your work?
Yes. Lady has been reasonably famous for many years now, in 1981 Terry Wogan was making jokes about us, a few years later I had to take her to Abingdon Hospital as they had so many customers due to her they wanted to meet her. 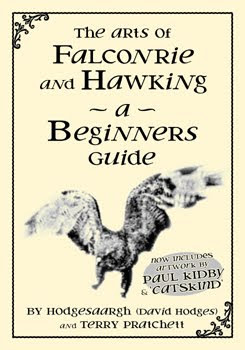 Posted by Dave at 12:00
Email ThisBlogThis!Share to TwitterShare to FacebookShare to Pinterest
Tags: Discworld, Interviews, Writing