Last Monday I referred to Susan at Stony River's Microfiction Monday as a contest, when it's more accurately described as a meme, since as far as I'm aware there are no winners and no losers.

Here is this week's image: 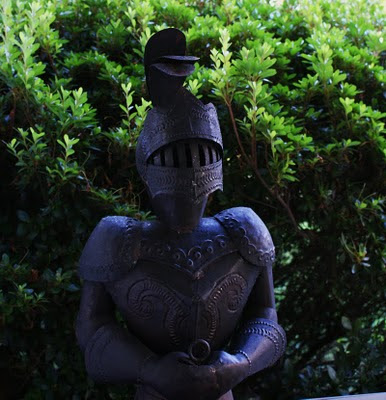 And here is my 140 character or less response to it:
The black knight stood guard by choice. Until the rust made his choice for him.

It was the most he could do.
Posted by Dave at 10:00
Email ThisBlogThis!Share to TwitterShare to FacebookShare to Pinterest
Tags: Microfiction, Writing

This made me laugh! Well done, black knight, vigilant to the last.

Definitely a great laugh to start my day, that's for sure! Love those black knights! A really fun one for the day, Dave! Hope you have a great week!

Hi thanks for dropping by. Be you new in these parts? Interesting take of enforced loyalty. Gone for predicament today. My 140 is here

As far as Microfiction is concerned, new I be.

New perhaps, but on the right playground. :)

I like that the stare is up to interpretation..is it menacing or wise?

Look forward to your next one!

Poor Black Knight, Me thinks he should have taken a spare Oil Can in his Back Pocket. This was good, thanks for stopping by my place today.

Maybe a little oil would resurrect the valiant knight?

Poor soul! I wonder if his stare would force strangers to turn away! What power that would be!

Or he could cry like a little girl. That would get someone's attention.

What a fate! Now let's hope there are no wasps nearby looking for a good place to build a nest ... (or no, wait, that would be *my* luck!)