So, a mere nine and a half months late here is my L post.

Leonard
Leonard looked up. He wasn't alone. Most of the population on this side of the planet were doing exactly the same thing. He stared intently at the tail following the meteorite. Leonard was surprised by the colours, they were vivid and bright. He had expected the whole spectacle to be less, well, less spectacular. A shape moved in front of him causing a distraction. He drew his gaze down from the sky and took in the street. Among his neighbours, all of whom were still watching the sky, he saw the silhouette of a woman in black moving awkwardly in a crouch. She stalked between Mr Hargreaves and the woman from number 24 whose name he didn't know. The shape disappeared behind Leonard's neighbour and he craned to see it emerge from the other side. Leonard waited the amount of time he would have expected an agile woman to take to cross from one end of Mr Hargreaves to the other. There was no sign of her. He waited a little longer. There was still nothing. Leonard moved to stand next to Mr Hargreaves and he saw her. She was moving slowly away from him practically at a crawl. Leonard looked at Mr Hargreaves to see if he had seen her. He hadn't. He was staring open mouthed at the sky.
'You're drooling.' Leonard joked.
If Mr Hargreaves had heard him he showed no sign. Leonard spoke again, a little louder. Hargreaves was transfixed by the meteorite. Leonard looked around and saw the same vacant stare on every face. That is every face, except one. He looked to the woman in black. She had heard him talking to Mr Hargreaves and was looking directly at him.
'What's happening?' he asked her.

The light from the torch skipped across the ceiling tiles as Ivy tried to pull on a door handle without letting go of it. Harry moved tentatively towards her.
'Can I help?' he asked.
There was no response.
'I said 'Can I help?'' he asked again.
'I heard you' said Ivy.
They stood in silence. Harry eyes following the torchlight as it darted up down the wall. He felt useless, but he knew that's exactly what his sister wanted him to feel.
A loud crunch brought his contemplation to an end and he looked up as Ivy opened the door at the end of the corridor, the door to the outside world. Harry remembered the first time he went through it. He'd been nineteen years old and one day in the summer a woman opened the door to his room and told him that he was going outside. He'd been excited. He has never been outside before. He remembered stepping outside onto the green grass and staring out at the view. He took a deep breath and let it out of his lungs slowly. He turned to ask the woman what he should do next, but she wasn't there. The door stared back at him silently.
Harry looked up to see that Ivy had stepped outside. He moved to follow her, but he slipped. Harry braced against the wall to stop himself falling.
'Ivy!'
'What?'
Harry was suddenly very aware of why he hadn't kept in touch with her.
'What do you mean 'what?' Shine the torch over here.'
She sighed and swung the torch in his direction. Harry looked down at the floor. There was a bright red puddle at his feet.
'It's blood.' he said.
'Yeah' said Ivy as she turned away, taking the torchlight with her.
'Ivy!'
She shone the torch at Harry again. He couldn't see her face, but he could picture the petulant expression that it carried. The blood was halfway up his left trouser leg and closer inspection of the puddle revealed that there was a footprint between it and the door. Ivy's footprint he assumed. Along one side there were straight lines that formed a trail that lead toward the interior of the building.
'Whoever was killed here. Someone moved the body.'
'Well, yeah,' said Ivy, 'because they're not here, are they?'
Harry stepped over the puddle and out onto the hillside. Ivy turned the torch off with a satisfying click.
'I was just thinking about-'
'I know.'
The stood in silence again. Harry had been thinking about himself, aged nineteen sat on the step at the foot of the door hoping it would open again. The outside world had started to get dark and cold. He had been hungry, tired and with no idea what he was going to do.
Harry looked at his sister and wondered if she was thinking along similar lines. She wasn't.

Annabelle stood in the garden marvelling at the sky. Emma and Gloria had long since left her to it. Still looking up, Annabelle span around until she was dizzy. She stopped and stumbled, but didn't fall. Two eyes stared at her. Annabelle moved towards them. Their owner was startled and leapt up the garden wall and walked along the top of it.
Annabelle had lost interest in the meteorite. The cat on the wall was much more interesting. She watched as it walked the length of the wall and regarded her with those eyes again. Annabelle climbed up onto the wall and followed the cat. It allowed her to catch up to it and then jumped into the garden next door. Annabelle did the same.

Daniel sat on a bar stool alone in the empty pub. The other drinkers were all outside gazing in awe. He drained his glass and looked around, before standing and leaning over the bar. Cumbersomely, he poured himself a drink from the wrong side of the bar. Daniel sat again with drink in hand and swivelled on his stool. He sipped his drink and reached for the television's remote control. He cycled through the channels. Most were only showing test cards, while others were broadcasting shots of empty studios or deserted locations. He laughed. Never again would he complain that there was nothing worth watching on.

The meteor tore through the planet's atmosphere with no regard for the effect it was having on the locals. It left something behind, something that hung in the sky above the world as black as night. Not that anyone would notice it yet, because the sky was too busy also being as black as night.

Posted by Dave at 10:00 No comments:
Email ThisBlogThis!Share to TwitterShare to FacebookShare to Pinterest
Tags: Blogfests, Writing

It's at London's Conway Hall, 25 Red Lion Square, near Holborn and it's absolutely free.
Posted by Dave at 10:00 2 comments:
Email ThisBlogThis!Share to TwitterShare to FacebookShare to Pinterest
Tags: 1848, Acting, New Factory Of The Eccentric Actor 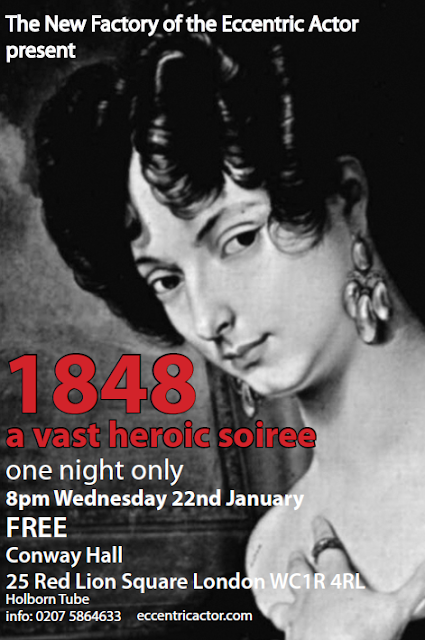 Posted by Dave at 10:00 No comments:
Email ThisBlogThis!Share to TwitterShare to FacebookShare to Pinterest
Tags: 1848, Acting, New Factory Of The Eccentric Actor

Sorry. I was elsewhere. How have you been? Is it too late to say Happy New Year?

I was halfway through the A to Z Challenge in April and then I went AWOL. I am still working the as-yet-unnamed novella that I got eleven chapters into. For a time I was resistant to blogging about something else while the novella was still unfinished and so as a result I blogged nothing here at all.

Several things have happened which I would have written on here about and didn't. A New Year seems a perfectly good time to change that. So not necessarily in the order they happened and with a view to writing about them in detail later:

⚫ I asked Sarah to marry me. She said yes.

⚫ We've moved away from the flat where the incident occurred.

⚫ I've had writing work. Some of it paid.

⚫ I've written a comic strip for the forthcoming third issue of The Psychedelic Journal Of Time Travel.

⚫ I'm rehearsing a play at the moment.

I'm sure there's probably something else, but that's enough to be going on with. I'll be in touch.