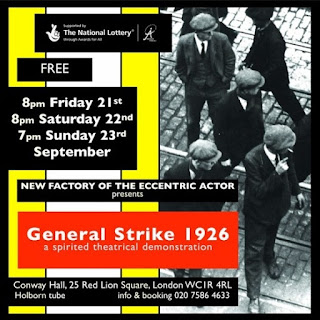 The next show I was involved in was another of the New Factory Of The Eccentric Actor's mass cast historical epics. As the name suggests this one concerned the General Strike of 1926.

It was presumably intended for performance in 2006 on or around the eightieth anniversary of the strike, but it wouldn't be staged until September the following year.

I played a journalist and Charles, a toff turned bus driver who was enjoying the strike enormously. 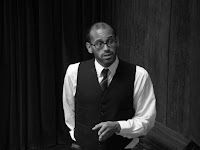 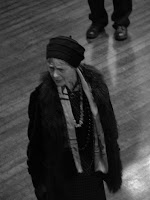 This show was enormous fun and the cast were fantastic. There were 68 members of the cast. Here are just two of them: the late, great and much missed Matthew Eggleton on the left and the phenomenal Annie Firbank to the right.

Over the course of three nights there were somewhere in the region of 450 people in the audience. On the last night, just days before her hundred-and-second-birthday, Hetty Bower, a real life general striker, in the audience. She stood at the end of the play for her own rapturous round of applause. 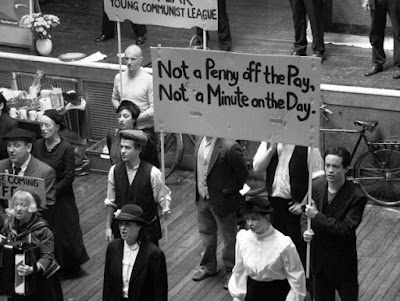 It was featured in The Guardian's theatre blog.
Posted by Dave at 10:00
Email ThisBlogThis!Share to TwitterShare to FacebookShare to Pinterest
Tags: Acting, New Factory Of The Eccentric Actor