Joss Whedon, writer of Alien Resurrection, described his TV series, Firefly, as “nine People looking into the blackness of space and seeing nine different things.”, it’s an evocative description of Firefly, but it’s arguably even truer of the original Alien (although to make the maths work you have to include the alien and Jones the cat).

People talk at length about Ripley, the Alien and the relationship between them, but the rest of the crew deserve our attention too. Here they are below in a white void staring out of shot.

Today is Alien Day* and Alien is forty years old this year, so I wrote this. 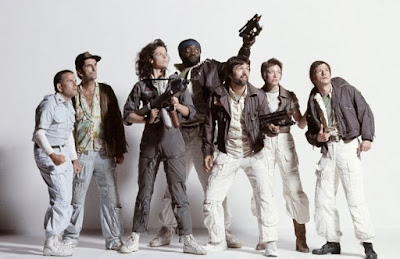 * The planet featured in the first two films is designated LV-426, and in American date order this corresponds to April 26th.
Posted by Dave at 10:00
Email ThisBlogThis!Share to TwitterShare to FacebookShare to Pinterest
Tags: Alien, Writing