I mentioned previously that in addition to the piece that I wrote about The Price there was another...

It's called When The Walls Fell and its all about Darmok, that episode of The Next Generation in which Picard is stranded on an alien planet by a Tamarian, an alien that speaks entirely in metaphor, and they are forced by adversity to learn to communicate with each other. 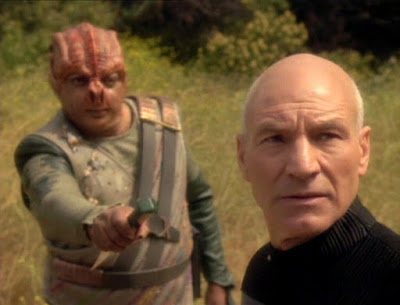 The lion share of it is a great point of view piece written by Laura Gillespie, while I contributed the bits written in the Tamarian idiom.

Outside In: Makes It So is available here.
Posted by Dave at 10:00
Email ThisBlogThis!Share to TwitterShare to FacebookShare to Pinterest
Tags: Outside In, Star Trek, Writing