"I'm Sure That In 1985 Plutonium Is Available In Every Corner Drug Store..."

1985 was the year that Nelson Mandela rejected an offer of freedom from the South African government, the Greenpeace vessel Rainbow Warrior was bombed and sunk, the Live Aid concert took place, the wreck of the Titanic was located and the first artificial heart patient to left the hospital.

These are a few of my favourite things from 1985:

Back To The Future
Michael J. Fox and Christopher Lloyd are fantastic in this brilliant and intricately plotted time-travel piece that effortlessly combines SF, action, comedy and romance. This is an absolute cinematic masterpiece. Here's the trailer.

Clue
As a rule, board games probably shouldn't be the inspiration for films and yet an adaptation of Cluedo makes for a cinematic experience that is much more fun than you might expect. Tim Curry, Eileen Brennan, Lesley Ann Warren, Michael McKean, Christopher Lloyd, Madeline Kahn and Martin Mull are great in this very silly whodunit. Or rather whodunit and where and with what? 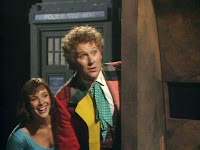 Doctor Who: Vengeance On Varos; The Mark Of The Rani; The Two Doctors; Revelation Of The Daleks
Colin Baker and Nicola Bryant return as the Sixth Doctor and Peri for the twenty-second season and highlights include Vengeance On Varos, an excellent commentary of screen violence, video nasties and even reality television before it really existed. Nabil Shaban, Martin Jarvis, Forbes Collins, Owen Teale, Stephen Yardley and Sheila Reid are wonderful. The scenes of the chase through the punishment dome, the body horror, Arak and Etta as passive viewers and the ending are brilliant. As The Mark Of The Rani appears on necks in the North East of Victorian England, the Doctor and Peri have a different sort of adventure. Kate O'Mara, Terence Alexander and Gawn Grainger are brilliant, the location footage looks wonderful, the music is beautifully understated, the Rani's TARDIS console room is a beautiful piece of design, the interactions between the three Time Lords are great and the Rani mocking the dynamic between the Doctor and the Master is lovely. Two Doctors meet in The Two Doctors as the Sixth Doctor encounters the Second. Robert Holmes' script is wonderful, in a lovely nod to the past the first scene is briefly in black and white, the Spanish locations look brilliant, the music is very evocative, the Androgums are a rich seam of very dark humour, the trenchermen scene is great, Jamie works very well with the current TARDIS crew, the Sontarans get some nice dialogue and it's great to see the Doctors finally meet, however briefly. The Pro-Vegetarian subtext is not-subtle, but does it really need to be? "Primitive creatures don't feel pain in the way that we would" cuts straight to the point. Baker, Bryant, Frazer Hines, Jacqueline Pearce, John Stratton, Laurence Payne and James Saxon are all wonderful and as usual Patrick Troughton is nothing short of fantastic. The season finale, Revelation Of The Daleks, is atypical, but brilliant. The Doctor and Peri are only one of a myriad of subplots and political intrigue. Somehow it never feels cluttered. The Daleks are also used sparingly and are all the more effective for it. The script is great mix of dark sardonic humour and horror, so the resulting episodes are delightfully grim, ironic and violent. The funereal Tranquil Repose sets, the glass Dalek and 'The Great Healer' all look great. The direction is full of excellent and varied use of high and low camera angles and tracking shots. Terry Molloy, Eleanor Bron, Clive Swift, Trevor Cooper, Hugh Walters, Alexei Sayle, William Gaunt and John Ogwen are superb. That such an fantastic story was broadcast as Doctor Who faced cancellation betray the lunacy of that decision.

The Adventures of Sherlock Holmes: The Copper Beeches; The Greek Interpreter; The Norwood Builder; The Resident Patient; The Red-Headed League; The Final Problem
Jeremy Brett and David Burke are fantastic as always. The second season opener The Copper Beeches is very creepy and the conversations between Holmes and Watson about literary criticism and countryside matters are brilliant. Charles Gray is wonderful as Holmes' brother, Mycroft in The Greek Interpreter. The Norwood Builder is a compelling case of murder and Colin Jeavons is a wonderful addition as Lestrade. Patrick Newell is wonderful as The Resident Patient and the opening scene is absolutely bloody terrifying. The Red-Headed League is beautifully shot and Richard Wilson and Roger Hammond are wonderful. Eric Porter is great as Moriarty and Burke is wonderful in his last appearance as Watson in the sprawling story, The Final Problem. 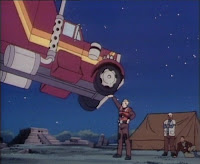 M.A.S.K.: The Deathstone; The Star Chariot; The Book Of Power; Highway To Terror; Video VENOM; Dinosaur Boy; The Ultimate Weapon; The Roteks; The Oz Effect; Death From The Sky; The Magma Mole; Solaria Park; The Creeping Terror; Assault On Liberty; The Sceptre Of Rajim; The Golden Goddess; Mystery Of The Rings; Bad Vibrations; Ghost Bomb; Cold Fever; Mardi Gras Mystery; The Secret Of Life; Vanishing Point; Counter-Clockwise Caper; The Plant Show; Secret Of The Andes; Panda Power; Blackout; A Matter Of Gravity; The Lost Riches Of Rio; Deadly Blue Slime; The Currency Conspiracy; Caesar's Sword; Peril In Paris; In Dutch; The Lippizaner Mystery; The Sacred Rock; Curse Of Solomon's Gorge; Green Nightmare; Eyes Of The Skull; Stop Motion; The Artemis Enigma; The Chinese Scorpion; Riddle Of The Raven Master; The Spectre Of Captain Kidd; The Secret Of The Stones; The Lost Fleet; Quest Of The Canyon; Follow The Rainbow; The Everglades Oddity; Dragonfire; The Royal Cape Caper; Patchwork Puzzle; Fog On Boulder Hill; Plunder Of Glowworm Grotto; Stone Trees; Incident In Istanbul; The Creeping Desert; The Scarlet Empress; Venice Menace; Treasure Of The Nazca Plain; Disappearing Act; Gate Of Darkness; The Manakara Giant; Raiders Of The Orient Express
The first episode sets the tone for the rest of the mammoth sixty-five episode first season as M.A.S.K. take on VENOM, Miles Mayhem's evil plot forces Matt Trakker to assemble his Mobile Armored Strike Kommand, Matt's son, Scott, and T-Bob are kidnapped, Hondo MacLean is injured, but cured by a MacGuffin and it all ends with a moralising coda. Crucially it shows off the capabilities of each of the vehicles and masks. VENOM's dastardly plans take them on a tour of the world and M.A.S.K. follow accordingly, over the course of the season the stories and animation get more complex and just over halfway through the new characters, vehicles and masks begin to arrive. Rhino, Thunderhawk, Gator, Condor, Jackhammer, Manta and Outlaw are all fantastic designs and, vitally given the nature of the audience, they closely reflect the toys they are based upon.

The Giraffe And The Pelly And Me by Roald Dahl
Roald Dahl's little story about Billy's dream of opening an old sweet shop with a hideous name and the motley crew that run the Ladderless Window-Cleaning Company is wonderful, while Quentin Blake's illustrations are as brilliant as ever.

Doctor Who: Polly The Glot 3; Once Upon A Time Lord; War-Game; Funhouse; Kane's Story, Abel's Story, The Warrior's Story & Frobisher's Story
Frobisher is kidnapped in the last part of Polly The Glot and while Dr. Asimoff gets a happy ending, the Sixth Doctor is forced to head into the cabinet of Astrolabus to rescue him in Once Upon A Time Lord and finds himself in world made up of the likes of The Lord of the Rings, Tarzan and Rupert the Bear (and in the case of the latter the strip takes on the style of Alfred Bestall's original perfectly), before Astrolabus attempts to leave the page. His fate catches up with him and the Doctor is freed of his influence, but not until Steve Parkhouse has revealed that Astrolabus is autobiographical (as far as maniacal Time Lord can be) by giving him the line: "How can you know...how long...I have been writing your life? What will you do? Now that I'm...gone?" After the scope of the previous run of strips, War-Game initially feels like a let down, but I like the chess allegory and the abrupt ending. The Funhouse takes control of the TARDIS until the Doctor turns back time within it, the regression of the Doctor and Frobisher is impressive. As their titles suggest Kane's Story, Abel's Story, The Warrior's Story are three distinct stories which are drawn together in finale Frobisher's Story, this innovative structure gives these stories an epic quality, mixing recent events in the comics strip with plenty of TV continuity it also introduces Peri to the strip, while the Valley(s) of the Gods, the Skeletoids and their rampage all look great.

Recommendations welcome. Not next month, but the month after: 1984
Posted by Dave at 10:00
Email ThisBlogThis!Share to TwitterShare to FacebookShare to Pinterest
Tags: Back To The Future, Doctor Who, M.A.S.K., Sherlock Holmes, These Are A Few Of My Favourite Things

The first Fright Night came out in 1985 as well.
Are you participating in the A to Z Challenge, Dave?

I can never get Brazil's title song out of my head!

I love that quote from Back to the Future. Classic.

And I think Clue is a very under-appreciated film.