The last two performances of The Undiscovered were yesterday. I was reluctant to reveal the content of the show in my first post about it, but now the show has taken place I can go into a bit more detail.

The cast initially came up with two ideas: the first concerned a group of actors locked in a haunted theatre, while the second was a murder mystery. The two ideas became entwined. Over the first month of rehearsals, the cast divided themselves into actors and ghosts. I won't give away whodunnit, but three of the actors shuffle off this mortal coil over the course of the play and become ghosts. 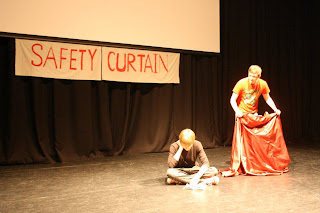 The devising process took its toll on the cast and there was a distinct lack of confidence in their material when they performed a version of the show-so-far for a hand picked audience in the fifth week of rehearsals. Some used this opportunity to realise the elements they needed to complete the play and some made excuses. Rehearsal attendance has suffered and those who have been more committed have done a good job. The cast were also been assigned production roles for various off stage elements. I was hoping this would make some of them realise how much work still needed to be done. It didn't really work. 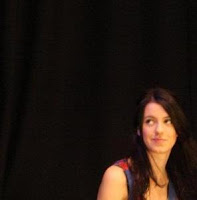 The fifth week saw us hotseating the characters that the cast had come up with. Easily my favourite question asked was "How old are you, and why?"

The sixth week was spent running the scenes we had and identifying what was missing. The group scenes were tough going sometimes, but they started to come together.

I spent much of week seven with the first years working on The Cherry Orchard and it seemed as though the cast had spent most of the time arguing, but when I rejoined the second years they had changed several scenes. They also added performances of the songs 'Well, Did You Evah' and 'It's Oh So Quiet'. We had a run of the show and I gave some notes. The eighth week was once-again shortened by bank holidays, but thankfully many of the cast came in to rehearse in their own time. This is week nine: performance week. For reasons too dull to go into the second year show had three performances and two of those were matinees. After a run-through which was intended to be the dress rehearsal, the cast impressed me by deciding to undertake another before the first performance. Wednesday's matinee turned out to be a raucous event. The addition of an audience saw the cast play the comedy scenes far more broadly and the students laughed so loudly that it began to affect other scenes. In particular, one of the three death scenes took on comedic connotations that previously weren't there and this disappointed many of the cast. The Thursday matinee and evening shows were a little more sedate and felt very different as a result.

The end result is that the second year class has finished their course with a quirky, energetic and entertaining theatre piece of their own creation.
Posted by Dave at 10:00
Email ThisBlogThis!Share to TwitterShare to FacebookShare to Pinterest
Tags: Directing, The Undiscovered