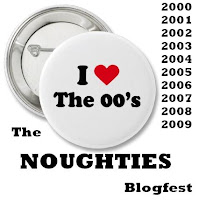 I'm going to declare The Noughties Blogfest a success since of the twenty-five people that signed up, nineteen posted a list.

I hadn't really thought about the research element involved. Working out what happened in a particular year might not have appealed to everybody. Sorry about that. If I did it again I'd probably keep the 'rules' the same, but give a suggestion that vagueness was permitted.

Tastes in music, comics and games were more varied and individual titles were all listed just once across the whole decade.

I thought I'd do a run down of the most popular suggestions:

2000
Film
In each year, film was the most hotly contested medium. In 2000 the runaway leader, appearing on no less than six lists was X-Men while Crouching Tiger, Hidden Dragon and Titan A.E. each appeared twice.

In TV there was generally less competition, which I found quite surprising. The Buffy The Vampire Slayer episode Restless was mentioned on two lists.

Fewer books made lists than I expected. Less surprisingly Harry Potter And The Goblet Of Fire by J.K. Rowling made three lists.

2001
Moviewise The Lord Of The Rings: The Fellowship of the Ring made it onto six lists. Ocean's Eleven was on three whilst Shrek, Moulin Rouge and Harry Potter And The Philosopher's Stone/Harry Potter And The Sorceror's Stone* were each on two lists. (* delete as appropriate).

2002
In cinema, The Lord Of The Rings: The Two Towers continued to dominate again with six appearances. The Pianist, Equilibrium and The Bourne Identity were all two lists each.

The only TV show to get a look in this year was Firefly, posted no less than four times.

2003
In film, surprisingly The Lord Of The Rings: The Return of the King got less love than its predecessors getting onto four lists, with Pirates of the Caribbean: Curse of the Black Pearl just behind getting three mentions. Bad Santa, Big Fish and Finding Nemo were all on two lists each.

Bookwise Harry Potter And The Order Of The Phoenix by J.K. Rowling appeared on four lists.

2004
After The Lord Of The Rings movies had subsided the field was more open, with Eternal Sunshine Of The Spotless Mind and Spiderman II both appearing on three lists, while The Butterfly Effect, House Of Flying Daggers, The Incredibles and Shrek 2 got two mention apiece.

2005
After the success of Firefly it isn't a surprise that its movie sequel Serenity won out with five mentions, while Star Wars, Episode III: Revenge Of The Sith got three and Batman Begins was on two lists.

On TV, Doctor Who was on three lists and Bones was on two.

In books, Harry Potter And The Half Blood Prince by J.K. Rowling got four mentions.

2006
Bond prequel Casino Royale topped this year's movies with three listings, while The Illusionist, Little Miss Sunshine and Stranger Than Fiction all got two.

2007
In movies, Transformers received five mentions and Shrek The Third got two.

Harry Potter And The Deathly Hallows by J.K. Rowling appeared on four lists.

2008
Superhero movies came to the fore this year as Iron Man was on five lists and The Dark Knight was on four.

The book The Hunger Games by Suzanne Collins was posted three times.

2009
Avatar was listed four times, Sherlock Holmes and The Hangover three times each and Moon twice in films.

Hopefully I'll see you here in eleven months time for
The Nineties Blogfest...
Posted by Dave at 10:00
Email ThisBlogThis!Share to TwitterShare to FacebookShare to Pinterest
Tags: Blogfests

This was a fun blogfest - and I love that you took the time to create a summary.

Thanks for the idea and hosting!

I guess I was the only one listing music. Or games. It was fun though!

I also think you're BANGIN to give us feedback and a summary of how it all went down in Chinatown.

Brilliant Blogfest...it was fun to do and fun to read. Now go and think up another one for us to do.

Sorry that could have been been clearer, couldn't it?

I meant that no two people posted the same music, comics or games.

I'm glad you enjoyed it. I've already set my sights on The Nineties Blogest...

I did music, too. Hooray.

Thanks for reposting the links to the participants, Dave. I was late last week in getting to them all, and then the Linky thingy disappeared and I was so lost. Now I have some more reading to do.

I did music too.