Up and down the UK households have been filling out Census forms. One of the questions on the form requires that you describe what you do in your job. Here's my answer: 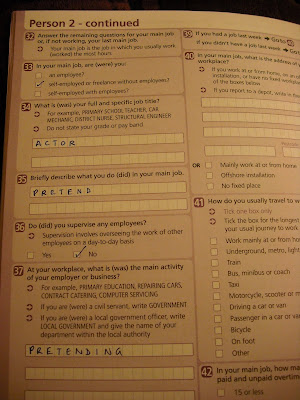 Now although I'm posting it here today it's not an April Fool's Day joke, but I like to think that in a hundred years time it'll look like one.

In 1851, Queen Victoria took part in the census, recording her occupation as "Queen", while Prince Albert was listed as the head of the household. Ten years later this was reversed and he was listed as "Husband".

Over the years people have volunteered their occupations as "sailor's wife and brothel keeper", "professional wizard" and a "retired smuggler". William McGonagall's occupation, is listed in the 1891 census as "poet", with quotation marks added afterwards by a cynical census taker.
Posted by Dave at 10:00
Email ThisBlogThis!Share to TwitterShare to FacebookShare to Pinterest
Tags: Acting

Starting a new feature at my blog called The MicroFiction Muse! Please pop in and take a look and hope to see you next week! :O)

Best of luck with it.