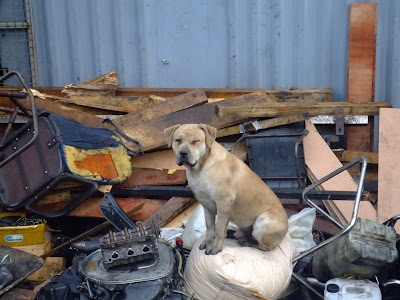 I nearly posted this yesterday, but I assumed someone would think it was a dull April Fool's joke.

So safe in the knowledge that it isn't, I took this photograph. I like photography. I don't really know what I'm doing, it's guesswork.

This photo was the In The Frame inspiration for the Desperation Dog scene written by Gi Lewis.

Nobody will have noticed it, however because it was like justifiably upstaged by the best cardboard puppetry I have ever seen.
Posted by Dave at 10:00
Email ThisBlogThis!Share to TwitterShare to FacebookShare to Pinterest
Tags: Behind The Bike Shed, Photography