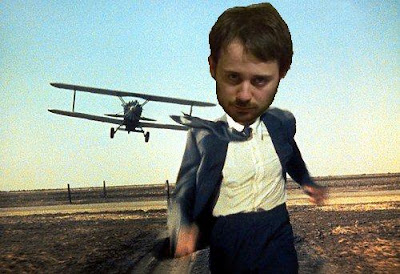 My friend, Phil Reed, is dead and the planet is poorer for it.
He was one of the wittiest people that I’ve ever encountered, so supportive of anything that I did and I can't quite believe that he's gone.
We bonded over a mutual love of Red Dwarf and Alan Partridge. We never met in person, but emailed each other almost weekly. From thousands of miles apart, we plotted a podcast that neither of us knew how to record, an epistolary novel that we convinced ourselves already existed somewhere and a series of books about underrated art which failed to set Kickstarter alight. I was never disappointed when these things didn’t come to fruition, because there would always be another idea. Until now.
Phil was so modest and interested in people. He used his corner of the internet to review geeky independent publications and interviewed those striving to make their own work, alongside more mainstream fare. He was also incredibly talented, but please don’t just take my word for it. His website is a treasure trove of the best literary criticism that the internet has to offer.
We can all react to a piece of art, but far fewer of us can create another in response to it. Phil elevated criticism. When he wrote about Alf with the same integrity and intention as he did Breaking Bad. I initially thought it was a one off joke, but when he went on to write hundreds of articles about the alien puppet, each funnier than the last and far better than the source material, it became apparent that Phil didn’t just see Alf as a trivial TV footnote, but as a wasted opportunity.
Phil's articles would make you think. He always had an angle that I had never considered, even on a text that I was very familiar with. I didn't agree with him about Alien³, but I really had to think about why. His Fiction Into Film articles on film adaptations and those on the films of Wes Anderson are frankly peerless. He wrote extensively and enthusiastically about computer games that meant nothing to me and I was gratified when Triple Jump hired him to write for them on the subject.
I wrote a handful of articles for his website. I still owe him one about Vineland by Thomas Pynchon. The sense of guilt I feel about that is utterly pointless and yet punishing.
I proofread one of his novels. It was so good. It was an absolute pleasure and a privilege. I presume that the final text is languishing on a hard drive somewhere and I find myself thinking about John Kennedy Toole’s mother.
Over the years he had expressed an interest in coming to the UK, sometimes to visit, sometimes permanently. In recent weeks this had stepped up a gear and I had been researching visas. The reversal of Roe vs Wade had been a turning point for him and although I knew that the grass wasn’t really any greener here, I wanted to help him in any way I could. I knew he was fragile when we talked over zoom and I didn’t imagine he could outrun what was worrying him, but I confess that I thought if he was here the novelty might be a welcome distraction and arrogantly I thought I could help better in person.
I’m trying to take solace from the fact that in some way this is what he wanted, but it’s much easier said than done. It’s fitting I suppose that someone who lived so much of his life online, would post his suicide note there, but that doesn’t make it any easier to read.
I will miss him.
http://noiselesschatter.com/
Posted by Dave at 10:00
Email ThisBlogThis!Share to TwitterShare to FacebookShare to Pinterest
Tags: Phil Reed

Dave, it's entirely possible I already know you under some screenname, but hey, I'm Casey. I knew Philip too, and I commented on his blog using my name.

I have Philip's hard drives, and there are definitely some novels and/or pieces of novels there. Why don't we try to make sure they get published?

We're doing a retrospective Xmas Bash on October 29, with shows from past Bashes, and as many of his old hosting segments as I can manage to find. And then we're doing the regular Bash on Dec. 17. I hope you can come to both.

This grief is maybe the hardest thing I've ever had to deal with, and I can't do it alone. I'm still getting used to saying this, but I need all the help I can get, and I also want to be able to share my memories of Philip with you.

Maybe it's best to email me? caseyroberson@hotmail.com

Thank you for being Philip's friend.