The Many Deaths of Janeway

With the demise of Eaglemoss and the subsequent disappearance of its website, I'm going to start posting my articles for them here. As many of the articles were written to coincide with the dates of particular anniversaries, I'll try to keep to those dates, but the evergreen ones I'll try to post on here regularly.

STAR TREK: THE MANY DEATHS OF JANEWAY
How many times has Janeway 'died'?
(Originally written for Hero Collector, published 18 April 2019

David Black adds up the many times the Voyager captain has met – and survived – her end.

Captain Kathryn Janeway of the USS Voyager is a woman of great achievements. She has travelled across the Delta Quadrant, made first contact with dozens of new species and hyper-evolved into a salamander. One of the most amazing things about her time aboard Voyager is how often she died and how little it affected her career. Let us count the ways... 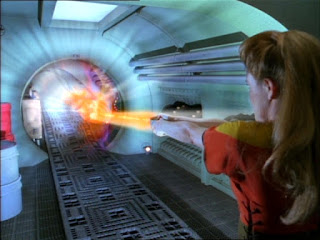 Death #1
Time And Again
Cause of Death: Polaric explosion.

While investigating a planet that is the site of a polaric explosion, Janeway and Paris are drawn back in time to the day before the explosion. During a search for evidence of Janeway, Kes, using her newly discovered telepathic abilities, says “She was here. This is where she died.”

Janeway realises the attempts by the Voyager crew to rescue them from the future are the cause of the explosion and prevents her own rescue, which prevents the explosion and therefore she never visits the planet and this renders that timeline redundant. 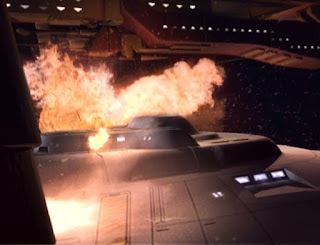 Death #2
Deadlock
Cause of Death: Explosion when Voyager self-destructs.

As a result of a journey through a plasma drift to avoid a Vidiian ship, all the matter on Voyager is duplicated, including its captain and crew. However, the antimatter remains unaffected and with two ships drawing on it, supplies quickly run low. One duplicate Voyager is badly damaged and suffers losses, the other seems largely unaffected. The undamaged Voyager is boarded by the Vidiians and its Janeway sets her ship to self-destruct and is killed in the resulting explosion and freeing the other to continue the journey home. 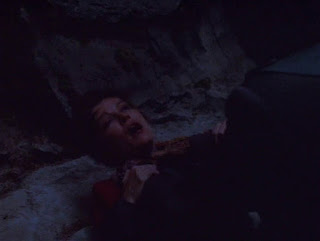 Death #3
Coda
Cause of Death: Strangulation

Janeway and Chakotay are on a mission in a shuttle when electrical interference forces them to crash on a planet. The captain sustains critical injuries in a shuttle crash, but Chakotay revives her with CPR. They are captured by the Vidiians and Janeway is strangled by a Vidiian in a cave. 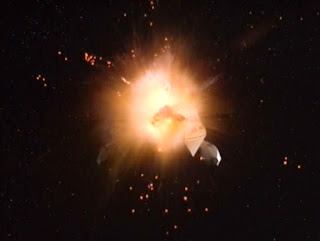 Cause of Death: Shuttle explosion

Janeway and Chakotay find themselves back aboard the shuttlecraft in space and suspect a time loop, when they are again attacked by the Vidiians. They are both killed when the Vidiians destroy their shuttle. 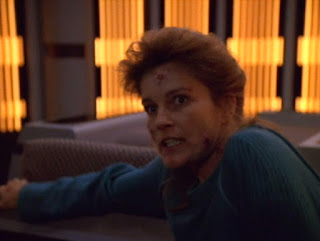 Cause of Death: Asphyxiation

Again, the captain and her first officer are in the shuttle en route to their mission. When the Vidiians show up again, they return to Voyager. Janeway has contracted the Vidiian phage and unable to find a cure, the Doctor uncharacteristically euthanises her with a neural toxin. 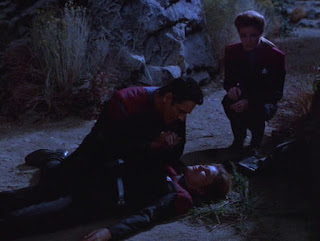 Cause of Death: Massive cerebro-vascular collapse

Once more, Janeway finds herself on board the shuttle, but only briefly. She has an out-of-body experience as she watches Chakotay perform CPR on her prone form. He is unsuccessful. Janeway wanders Voyager’s corridors like a ghost, while her crew search for her and eventually give up looking. She attends her own memorial. An alien, masquerading as her father’s ghost, is inhabiting her cerebral cortex, attempting to convince her to relinquish her life willingly, but she fights back, denies him sustenance and awakes on the planet. 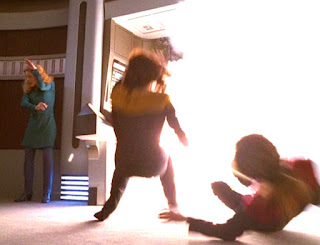 Cause of Death: console explosion to the face

An elderly Kes in a state of temporal flux finds herself jumping back in time to earlier points in her life. At one point, she jumps back to the beginning of the “Year of Hell” (see below) and witnesses a Chroniton torpedo hit that causes a bridge console to explode killing both Janeway and Torres. However, what we see here is merely one possible future. 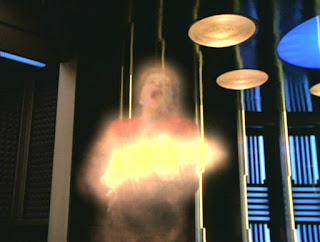 Cause of Death: Phaser malfunction

A holographic tactical-training program concerning a potential Maquis mutiny takes on a life of its own. Tuvok’s program was rewritten by Seska before she left the ship, including a malfunctioning phaser rifle that kills the hologram of Captain Janeway. 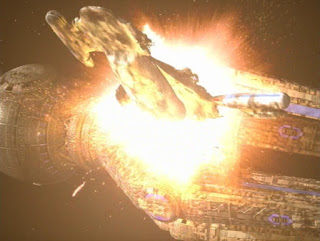 Cause of Death: Explosion

After 257 days of Hell, that have left Voyager beyond repair and the crew forced to abandon ship. Janeway singlehandedly pilots what is left of Voyager during a battle with the Krenim Time Ship. With the weapons unavailable, she rams the other vessel, and the resulting explosion completely destroys it. The captain goes down with the ship. A shockwave erases the Krenim ship and the timeline it created from history. 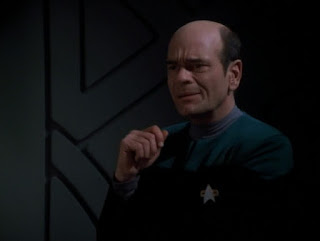 Cause of Death: Unknown

Some seven centuries after his time aboard Voyager, the Doctor’s back-up module has been discovered by archaeologists. He is reactivated in the Museum of Kyrian Heritage. Accused of war crimes and the Doctor is forced to defend his crew’s reputation for their role in the conflict between the Kyrians and the Vaskans. Either way, after seven hundred years Janeway is presumably pushing up daisies. As the Doctor himself puts it “Somewhere, halfway across the galaxy, I hope, Captain Janeway is spinning in her grave!” 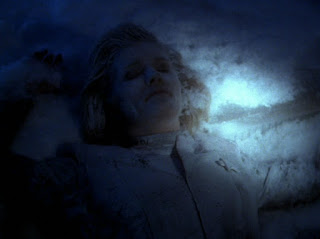 Cause of Death: injuries sustained in a crash landing

In an effort to get home quicker, Paris and Kim create a quantum slipstream drive. On its maiden flight, the Delta Flyer piloted Chakotay and Kim makes it all the way home, but Voyager is pushed out of the slipstream and crash lands on a frozen planet killing everyone aboard.

Fifteen years later, Chakotay and Kim return to the crash site to discover their dead crew mates, including the captain, frozen solid. With the help of the Doctor and Seven of Nine’s corpse they manage to send a different course correction back in time which collapses the slipstream and saves Voyager. 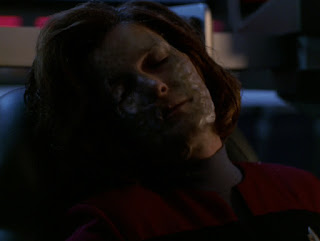 Cause of Death: Acute cellular degradation

Radiation from an enhanced warp drive employed by a bio-mimetic duplicate of Voyager causes a loss of cohesion. Captain Janeway’s duplicate dies on the bridge and her ship and crew are not far behind her. The real Kathryn Janeway is completely unaware of their sacrifice. 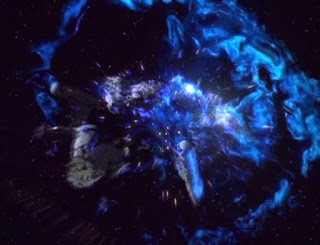 Cause of Death: Explosion

The USS Voyager is destroyed by a temporal disruptor while Janeway is on the bridge, however Seven of Nine and Janeway are recruited by a Starfleet ship from five hundred years in their future to prevent the device being planted in the first place. They successfully apprehend the saboteur and the events of this alternate timeline never come to pass. 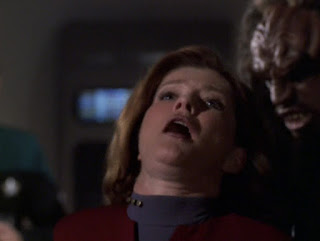 Death #14Barge of the Dead

Cause of Death: stab wound to the neck

The entire senior staff are massacred by a couple of Klingon warriors. Captain Janeway is cruelly, and dishonourably, cut down from behind whilst making a speech paying tribute to the achievements of the Klingon Empire. It’s all in B'Elanna's dream and so Janeway lives to fight another day. 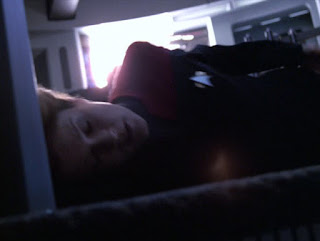 Cause of Death: console explosion

In the very next episode, another crewmember fantasises about Janeway’s death. It would be hard not to take that personally. The Doctor daydreams that he takes over control of the ship and to do that requires the captain to be out of the way. During one of his flights of fancy the Borg attack and one of the bridge consoles explodes killing Janeway, but once again it’s only a dream. 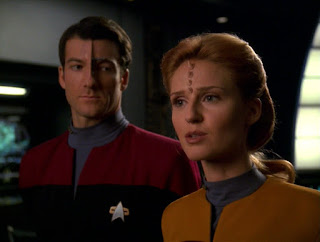 Cause of Death: Unknown

When a spatial rift causes time aboard to become fractured, Janeway and Chakotay meet by a Naomi Wildman and Icheb from an alternative future. They are told that they died seventeen years earlier, but they are given no details about how they met their demises. Janeway, Chakotay and their crew are reunited from across various time periods and successfully bring the ship back into sync. This renders the alternative timeline potentially null and void. 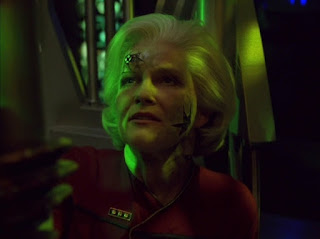 Cause of Death: neurolytic pathogen

Captain Janeway encounters an Admiral Janeway from 26 years into her personal future. The captain injects her future self with a neurolytic pathogen, with her permission, and the admiral allows herself to be assimilated by the Borg Queen. The pathogen infects the wider Borg Collective and they fail to prevent Voyager arriving home via a Borg transwarp hub out of the ashes of a Borg shipwreck. Captain Janeway gets her crew home early and that changes the timeline, so the future that Admiral Janeway came from may not come to pass.

There you have it, Janeway has cheated death on no less then 17 occasions. If you hope to learn from her example and you find yourself in a potentially fatal situation, ideally make sure it is an alternate future you that dies instead, or it’s a dream, or maybe reveal you were a hologram all along, then you’ll be fine.

I knew that Eaglemoss were releasing a bust of Captain Janeway, so I pitched this in the hope that they wanted an article to tie into it.

Originally entitled The Many Deaths of Kathryn Janeway, my pitch read: Captain Janeway holds the record for being the character most often killed in all of Star Trek, no less than seventeen times. This article details each and every time she kicks the bucket and how she manages to carry on regardless.

At the time, I had completely forgotten that Harry Mudd had killed the crew of the USS Discovery in Magic to Make the Sanest Man Go Mad no less than 56 times, and when I remembered, after this article was commissioned, I neglected to point it out to the editor.

This was the second article that I wrote for Hero Collector, but it was published third, possibly due to the release date of the bust. Oddly, this meant it appeared on the website just before Easter, which could have seemed a little controversial.

When I wrote this, it seemed pretty unlikely that we would ever see Janeway again, but the fortunes of the Star Trek franchise have changed significantly and now she has featuring been given a new lease of life in Star Trek: Prodigy, and could also return in Picard, Lower Decks or another as-yet-unannounced Star Trek series, therefore there could be another chance for her to die (and probably survive it) in her future... 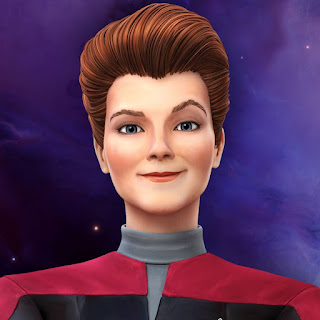 Posted by Dave at 10:00
Email ThisBlogThis!Share to TwitterShare to FacebookShare to Pinterest
Tags: Star Trek, Writing