August 2009 on the Carruthers blog was full of posts of the find-a-silly-picture-and-write-some-words-vaguely-connected-to-one-of-our-sketches variety. None of them make me laugh now. I wonder if they did then.

Phil Reed hurt a thumb and I marked the occasion with Thumbs Up, which was hardly extraordinary in itself, but Phil's much funnier response threw down a gauntlet and sadly my attempt to answer that is a link that no longer functions. We'll never know what I thought looked sufficiently like a "statue of a big teste". 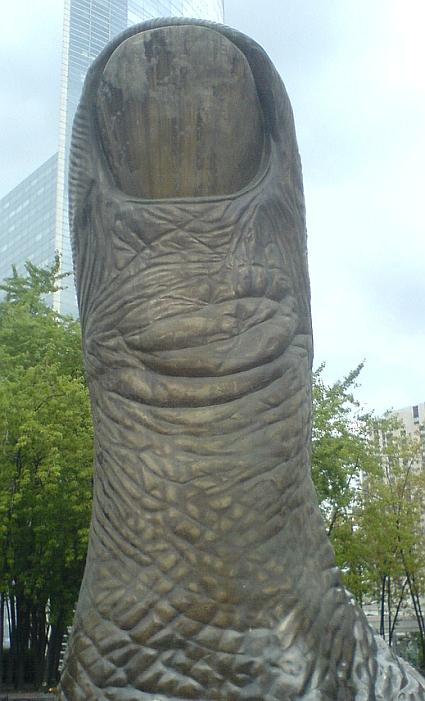 What was really nice to look back on was the kindness of Emma Kennedy, Marek Larwood, David Schneider, Debbie Chazen and Norman Lovett who we must have emailed and/or tweeted @ and they took the time to watch and encourage us. I'm enormously grateful to all of them. Even to Ivor Dembina. I've always believed that the bad reviews are just as important as the good, but I have to say it's reassuring that he was the only dissenting voice.

Years later, Andy was working on the TV shoot of something and bumped into Marek Larwood. I assumed it was Taskmaster, but Marek's never done one which seems like a criminal oversight on the part of whoever is producing Taskmaster. Marek saw Andy and did something of a double take and asked where do he know Andy from?

Also years later, I met Norman Lovett who didn't remember me at all, but as soon as he heard my name he said "Everybody's dead, Dave" and got on with his life, which is a much better reaction.
Posted by Dave at 10:00
Email ThisBlogThis!Share to TwitterShare to FacebookShare to Pinterest
Tags: Carruthers, Red Dwarf, Writing