When Star Trek: Deep Space Nine needed a villain they came up with the Dominion. Several races working together toward a common goal, they act as a mirror to the Federation. Although not one held together through shared ideals, but by fear, genetic manipulation and forced deification. The Dominion, and in particular the war that followed their introduction, helped to define DS9 and further mark it out as different to its contemporaries. 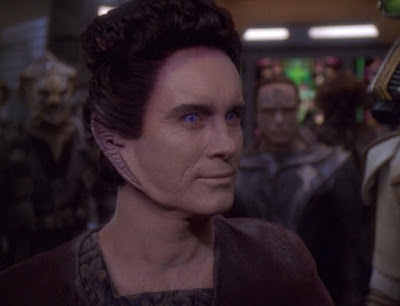 Astonishingly, it is twenty-five years since the Dominion were the new kids on the block and I wrote this in celebration. 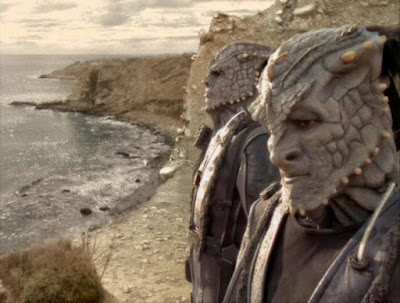 Posted by Dave at 10:00
Email ThisBlogThis!Share to TwitterShare to FacebookShare to Pinterest
Tags: Star Trek, Writing

It's an interesting summary and analysis. Did the Dominion War fundamentally alter the nature of Star Trek itself, permanently contaminating its idealistic perspective? Picard himself knew what being compromised felt like (based on his experience as Locutus) and that it definitely affected how others subsequently viewed him. Arguably DS9's response to this question was its Mirror Universe arc, which similarly stretched from second to seventh seasons. From the first one ("Crossover"), it had already decided that an original series concept (Kirk convincing Mirror Spock that an ideal was a good enough solution) wasn't as simple in execution as it seemed, but that with a little effort, things would still work out.