Outside In Takes A Stab Episode Revealed

My contribution to Outside In Takes A Stab is called First Among Equals and concerns the opening episode of Buffy, the Vampire Slayer's seventh and final season, Lessons.

The episode sees a death in Istanbul, Xander helping to reconstruct Sunnydale High School and Buffy embarrassing Dawn during her first day there, Willow recuperating with Giles in England. Back at school the Summers girls encounter vengeful spirits and a mad Vampire with a soul in the basement. Once again, that's not really what I've written about at all.

The final scene reintroduces the First, the Big Bad for the season. First Among Equals focusses on that last scene and boasts an exclusive behind the scenes look at the production of the episode. I guarantee you've never heard this anywhere else. 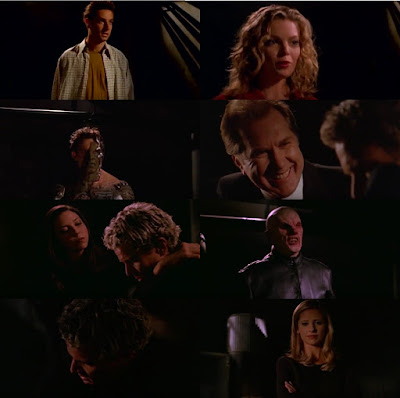 Outside In Takes A Stab is available here.
Posted by Dave at 10:00
Email ThisBlogThis!Share to TwitterShare to FacebookShare to Pinterest
Tags: Buffy, Outside In, Writing