So, it's ten years ago today that Mr Carruthers Presents... presented for the first time and as such I used the blog that month to promote the flip out of it.

Many of the references have dated (do people still remember T4?) and reading them back again I don't remember writing any of it. I feel I can enjoy them as if it was someone else entirely. Who was he?

I was really trying with the search for Carruthers posts at this point. It remains to be seen I doubt later posts would contain as many ideas as these three, and then I put him into a Where's Wally? (with apologies to Martin Handford).

I learned how to post an animated gif for this one, which is something I would struggle to now and I'm still pleased with the gag. Then I learned how to embed videos here, here and here, and reminds me we made the videos to promote the live show, but for obvious reasons they became much more of a lasting legacy.

This one made me laugh and I was clearly enjoying the asterisks.

I think I made this to accompany one of Gi's scripts and again I'm genuinely impressed by the effort that I put into what was essentially a riff on a sketch that maybe sixty people saw once.

The reviews were entirely genuine, although I can't remember where I found them. 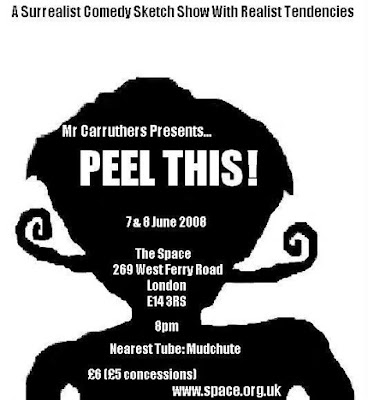 I was enormously proud of the show and so disappointed that we never quite managed to get the act back together. There were a myriad of reasons and it's not worth raking them up again now.
Posted by Dave at 10:00
Email ThisBlogThis!Share to TwitterShare to FacebookShare to Pinterest
Tags: Acting, Carruthers, Where's Wally?, Writing

Spot on with this write-up, I really think this website needs much more consideration. I’ll in all probability be once more to read far more, thanks for that info. best online casinos