Sisters Are Doing It For Themselves

Last year, Robert Smith? asked me to write a piece in the vein of his Outside In books, about the Prologue the Series Nine of Doctor Who. It appeared in a fanzine called The Nethersphere. It is chock full of geeky references and takes the form of a guest blog entry written by a huge fan of The Sisterhood Of Karn, a fictional TV Show in whose shadow Doctor Who languishes.

Ahead of the new series, an online mini-episode has emerged online. Modestly entitled Prologue it serves as a prologue to the latest television adventures of The Sisterhood Of Karn. Karn itself appears against a starry backdrop and is initially labelled simply as ‘The Planet’. Such is its importance to fans of The Sisterhood Of Karn that it almost doesn’t need spelling out. Where else could we be? 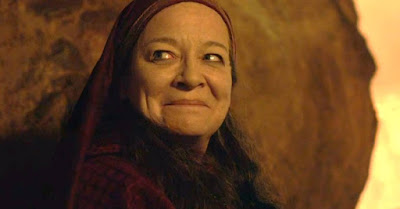 Prologue is a two-hander between everybody’s favourite high priestess Ohila, ably played as always by Clare Higgins, and the current Doctor Who, Peter Capaldi. The two work very well together. Higgins asks all the right questions and Capaldi almost answers them. As we’ve come to expect from Ohila, she sees through the Time Lord’s deceptions and knows him better than he knows himself.

Doctor Who is wrestling with a dilemma and naturally Ohila is the only one that can help him. Higgins plays what is essentially a confession scene with aplomb and Doctor Who follows her lead. The lines are delivered like a rally in a tennis match, but with words instead of balls and no net. Or maybe Doctor Who is playing tennis against himself and Ohila is the umpire.

Doctor Who: He and I've known each other a long time.
Ohila: You've been enemies for all of it.
Doctor Who: An enemy's just a friend you don't really know yet. Sorry. What, was that me being cynical again?

Who is Doctor Who talking about? Does it matter? Why is he being so rude to our heroine? Could it be that she has touched a nerve? The umpire strikes back? As we have come to learn from our years watching, discussing and absorbing episodes of The Sisterhood Of Karn, the answers to these questions are not as important as the act of asking them. The revelations that may come will be fleeting, but their ramifications could last a lifetime or more. It’s a scene reminiscent of a similar scene between Sisters Mawea and Canda from the Season Forty-Three finale, Warlock!, by Lawrence Miles, and we all know how that storyline turned out, don’t we?

Ohila: You are embarking on an enterprise that will end in your destruction.
Doctor Who: You could say that about being born. 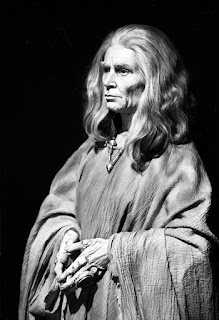 A famous writer once wrote “What's past is prologue”. It was Louis Marks in Season Nine’s Sunset On The Edge. What happened before leads us inexorably to what is happing now. Every effect has a cause. It’s a theme that The Sisterhood Of Karn has returned to again and again, most notably in those episodes set in the spaceship graveyard during the nineties. Neil Penswick’s Beyond The Mountains and Kate Orman’s Lost Properties are two obvious examples which have set the stage for recent storylines. Doctor Who may have done something to bring him to Ohila’s door and eventually we may find out what it is, but personally I hope not. Raika said it best way back in Season Two’s The Cave Of Secrets: “It is in the not knowing that we truly learn about ourselves.” That the episode is itself missing from the archives and we only have David Whitaker’s script and a sparse number of John Cura’s telesnaps to go on is both ironic and tantalising in equal measure. 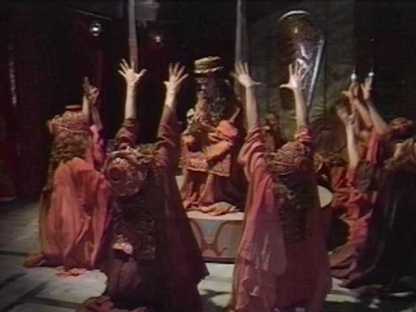 When is a Prologue not a prologue? Possibly when it takes place within the action of another episode. Rumour has it that this scene takes place entirely within The Sisterhood Of Karn’s season premiere, The Magician’s Apprentice. Is Prologue still a prologue if it takes place in the middle of the story? Can the middle of a story be a prologue simply if it is presented to an audience first? Isn’t every episode a prologue for the one that follows? That is, of course, except Lance Parkin’s Persona Non Grata, for obvious reasons.

Ohila: Wherever you go, there are people who care enough to find you.
Doctor Who: Look after the universe for me. I've put a lot of work into it.

Fans are reminded that Doctor Who is no stranger to The Sisterhood Of Karn’s universe. This is another in a long line of crossovers that have seen the world’s longest running science fiction series continually lend its credibility to Doctor Who. Beginning with 1975’s The Brain Of Morbius which saw Thomas Baker tangle with Cynthia Grenville, rejuvenate the sacred flame, but also slay the popular character of Mehendri Solon, played to perfection by Philip Madoc. This controversial act meant that Doctor Who wasn’t welcomed back for over thirty years and when he finally was, we couldn’t bear to look at him, in 2008’s radio episodes Sisters Of The Flame and The Vengeance Of Morbius. Five years later, Paul McGann returned to Karn again in 2013’s The Night Of The Doctor and never left, the episode also featured a youthful reflection of a photograph of John Hurt. 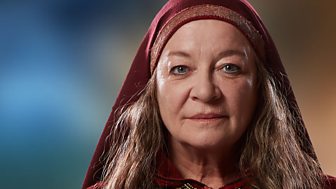 Fittingly, it is our leading lady Ohila that is given the last word. “Anyone can hide from an enemy, Doctor. No one from a friend.” The Sisterhood Of Karn returns to BBC1 with its record breaking fifty-third season and it shows no signs of stopping anytime soon. Don’t make any other plans on Saturdays for the next twelve weeks (and a Christmas special later in the year), stoke the sacred flame and make up a batch of stewed apricots, no custard.

There is, as yet, no word on whether an Epilogue will be forthcoming.

No Comments
Posted by Dave at 10:00
Email ThisBlogThis!Share to TwitterShare to FacebookShare to Pinterest
Tags: Doctor Who, Outside In, Writing