I'm having all sorts of problems with my tax return. Not with the traditional setback of working out how much I should pay, that's relatively simple. Instead I'm struggling to log on to the HMRC website in the first place. It's a long, complicated and boring story and one that I'm confident I'll have resolved before the deadline at the end of the month, but it's frustrating that I have put in a day and got nowhere.

I will be spending at least some of today telephoning automated helplines and getting irritated in the hope that I can get to the bottom of User IDs, Passwords and Activation PINs that don't seem to work. 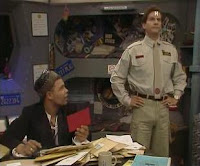 So while I'm sorting out my taxes again and by way of another distraction, here's a portion of script for a barely relevant scene from the Red Dwarf Series II episode, Better Than Life:

Rimmer: What? This is wrong! This is dead wrong!

Lister: Relax, it doesn't matter now. Not gonna catch you now, are they?

Rimmer: What? Just because we're three million years into deep space and the human species is extinct? That means nothing to these people. They'll find us.
Posted by Dave at 10:00
Email ThisBlogThis!Share to TwitterShare to FacebookShare to Pinterest
Tags: Red Dwarf, Tax