I thought I'd take the opportunity to look back through my posts for These Are A Few Of My Favourite Things, and focus on the Christmassiest elements.

So firstly, it's Christmas 1999 and The Santa-Land Diaries (below) makes for a great eclectic festive read with David Sedaris turning his wry eye on the crass commercialisation of the holiday. On television Futurama features a Christmas episode that shows us that in the year 3000 Christmas has been replaced by Xmas and Santa Claus is now a robot to be feared in the very funny Xmas Story. 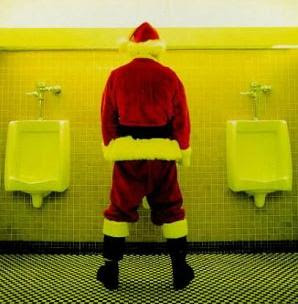 - - - - -
After the success of their second series, the year 2000 saw the broadcast of The League Of Gentlemen's Christmas Special (below). Taking the form of A Christmas Carol with the misanthropic Bernice cast in the role of Scrooge hearing confession from three other characters with their stories shown in flashback. Their tales melt her heart just in time for her childhood horror to be realised. It's fantastic. 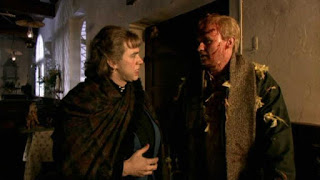 - - - - -
Futurama returned to an Xmas theme in 2001 with A Tale Of Two Santas (below) as Bender takes over Santa's reign of terror and Coolio makes a great cameo as the voice of Kwanzaa-bot. 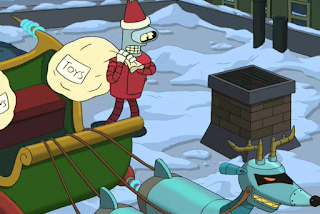 - - - - -
No less than three Doctors celebrated Christmas in 2005, although technically none were actually in 2005 if you catch my drift. The Ninth Doctor encountered Charles Dickens in 1869 at Christmas in The Unquiet Dead as Doctor Who returned to our screens earlier in the year as a roaring success. Two of the effects of this renaissance in the fortunes of the good Doctor were more appearances on radio and a Christmas special on the big day itself. The Eighth Doctor heard The Chimes Of Midnight at Christmas in 1906 on radio and the first real adventure of the Tenth Doctor was broadcast on television as he foiled The Christmas Invasion a hundred years later (below). 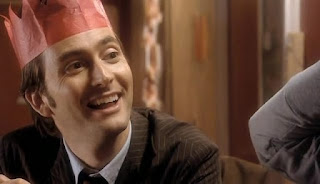 - - - - -
In 2006, the now-annual tradition of a Doctor Who Christmas special became a more regular occurance with as the Doctor and Donna, The Runaway Bride prevent the Racnoss from destroying Earth and Torchwood produced the beautiful Out Of Time which saw a plane from 1953 deposit three unwitting time travellers in the present day at Christmastime and followed their struggles to comprehend the modern day. While an adaptation of Terry Pratchett's twentieth Discworld novel, shows us what happens to Hogswatch, a Christmas-like festival, when Death is forced to take over from the eponymous Hogfather (below). 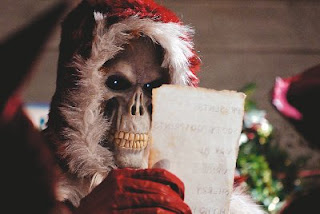 - - - - -
Two years later, Doctor Who introduces The Next Doctor in an epic yet character driven Christmas special set in Victorian London with some wonderful central performances (below). Adam and Joe's Song Wars Volume One gave us Adam Buxton's 'Christmas Country Party Time', a raucous and rambunctious Christmas song that I'd welcome over many of the other Yuletide staples. 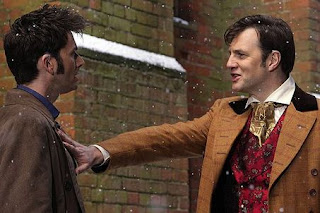 - - - - -
David Tennant was everywhere during Christmas 2009, QI, Hamlet and naturally his Doctor Who swansong The End Of Time was event television of the highest order. Tennant, Bernard Cribbins, John Simm, Timothy Dalton, the Master race cliffhanger, four knocks, the epilogue: this two parter was brilliant (below). A Child's Christmases In Wales is a great little story about traditions within one family over the course of three Christmases. 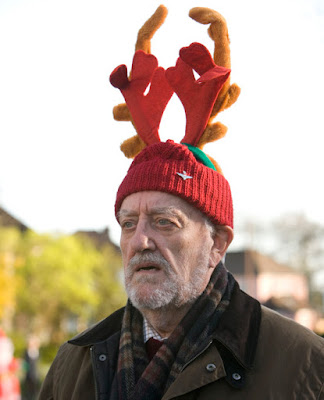 - - - - -
Another year, another Doctor Who Christmas special. 2010's A Christmas Carol is set in a pseudo-Victorian future which unashamedly borrows its theme from Dickens, but shakes it up enough to make it feel completely innovative. Matt Smith's first Christmas special was the first episode that secured him as the Doctor for me. He is at his best when acting alongside children and his scenes with Laurence Belcher are a joy. Michael Gambon and Katharine Jenkins are great. 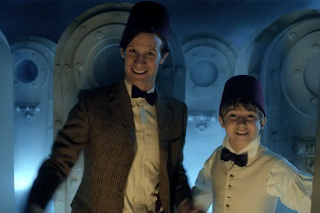 Here's to Christmas 2011...
Posted by Dave at 00:01
Email ThisBlogThis!Share to TwitterShare to FacebookShare to Pinterest
Tags: Adam and Joe, Discworld, Doctor Who, Futurama, The League Of Gentlemen, These Are A Few Of My Favourite Things, Torchwood