Today is Red Nose Day. The bi-annual fundraising extravaganza that sees millions of people doing something funny for money. Comic Relief has been organising Red Nose Days for 25 years and has raised over £620 million (as of 2011).

In recent years, the red noses have gone on sale in trios and I was moved to take the following photos in 2009 and 2011. As has almost become a tradition now, I've taken another photo in the same vein with this year's noses: 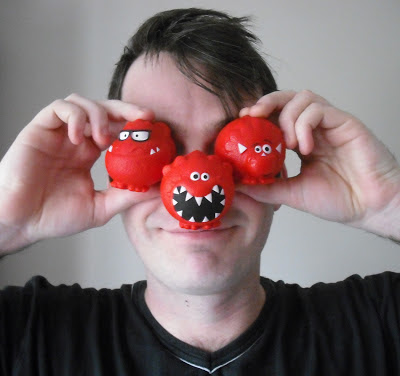 You should donate.
Posted by Dave at 10:00
Email ThisBlogThis!Share to TwitterShare to FacebookShare to Pinterest

Great nose Dave! I'll install a fart noisemaker on my phone to add some laughs. BTW
Join us for Star Wars March Madness!

Those are some great noses!