As part of the Directing module at university we were required to direct a section from a play from various different options. I chose the first scene of Caryl Churchill's Far Away.

The scene sees young Joan enter and tells her Aunt Harper that she is returning after climbing out of her window to investigate a scream that she heard. Joan tells Harper that she has just witnessed her uncle, Harper's husband, loading people, including bloodied children, into the back of a lorry. Harper tries quell Joan's fears and claims they are on the right side, tells her that he is taking them to a safer place and that they are making the world a better place, but that she can never tell anyone about what she saw because it would put all their lives in danger.

I cast Zoe Alyssa Cooper as young Joan and Sophie Glasscock as Harper. In doing so I found myself with two great actresses with such different timetables that it was almost impossible to get them in the same room at the same time.

We persevered and despite the difficulties I remember rehearsals being a lot of fun and passing by without a problem. As I was being observed on my ability to work with actors this lack of event wasn't particularly helpful. So I found myself employing exercises that I knew weren't going to very useful because it meant that I wasn't seen to be simply sticking doggedly to my first idea. I tended to try out my first idea second and then stick doggedly to that instead.

I decided upon a very stark design for set and props. The house I was living in at the time had a massive red rug, which I borrowed for Harper's home. I accessorised everything with this rug. I painted a wooden chair and a lampshade, but also seemed to manage to get paint everywhere else as well. My jeans, the sink in the gents toilet and a patch of floor. No one ever mentioned it and so neither did I. 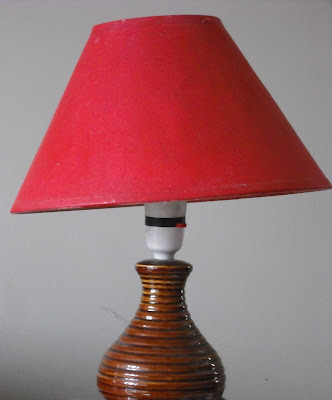 When it came to the actual performance I didn't know what to do with myself and sort of dithered until the lights went down. During the scene I watched intently, but couldn't quite relax. The girls were fantastic and really did me proud.

Zoe made playing an eight year old girl who might have witnessed a massacre seem effortless, and the same scene was staged by couple of other directors on the same evening and her portrayal was clearly the one that the audience loved and the other Joans in the other Far Aways were on a bit of a hiding to nothing.

I would love to have the opportunity to direct the full play and I know exactly what I would do with it.

Posted by Dave at 10:00
Email ThisBlogThis!Share to TwitterShare to FacebookShare to Pinterest
Tags: Directing