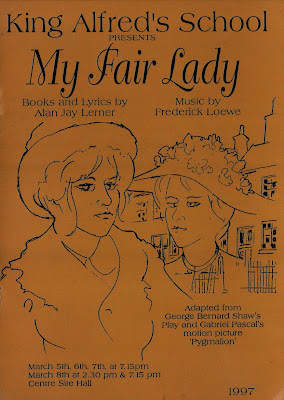 Continuing a walk down memory lane the first play I took part in at secondary school was a production of My Fair Lady. My school almost exclusively staged musicals which truth be told weren't my cup of tea. They still aren't. I would always nearly audition for them and then bottle out when I discovered that singing solo in front of your peers was a requirement.

When My Fair Lady came along I got over it long enough to audition. I remember we all had to sing 'Wouldn't It Be Lovely?' We were all sick of hearing it by the end of the auditions.

I played Jamie. Ever heard of him? I seem to remember someone saying he was Alfred P. Doolittle's best man but not his best mate. I don't think any of that was supported by anything in the text.

The dance routine for 'With A Little Bit Of Luck' was improvised and altered every night by Gavin, who played Doolittle. Apparently this made it pretty obvious that it took me longer to pick it up than the other David in our trio.

I was also in the ensemble for songs like 'Actor Gavotte', which was a day at the races for the great and the good and the rich. It was decided that this would be signified with top hats. Top hats on loan from idiots. The fellas were assembled and they were each handed a hat. As the initial excitement was reaching fever pitch and someone mimed throwing one above their head it was revealed that they were antiques and that we would held accountable for any damage. If you own an antique anything, do not ever lend it to someone producing a play. Ever. 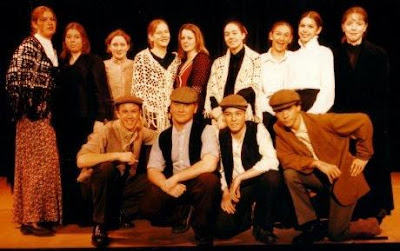