Blogfest, I Hate You!

Most blogfests are a bit of a love-in. Post your favourite somethings and tell the world why you love them. Tessa's blogfest on the other hand is all about the hate. 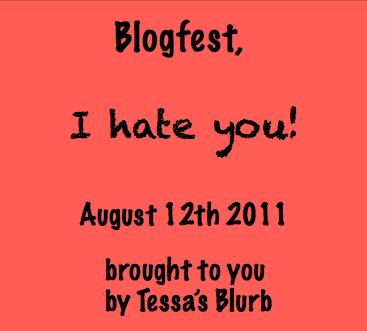 The last week has been full of hate and I couldn't bring myself to write about it. So here is this instead:


Dawn seeped into the bedroom through the gaps in the curtains. Silently the light intensified until it woke Robin. He opened a pair of bleary eyes and looked at the ceiling. Several thoughts all tried to occur to him at once. It was as if they had been queueing up for consciousness, but when the shop finally opened fo business they weren't willing to wait their turn. The thoughts in no particular order were: that his eyeballs hurt, that his wife wasn't sleeping beside him and that this was probably the best he could expect to feel all day, which unfortunately for Robin was starting from quite a low base.

He looked over at the empty half of the bed and scolded himself for experiencing the briefest moment of surprise that Nicola wasn't still in bed. It had been weeks since she left him and yet every morning he still half expected her to be there.

It took a great deal of willpower, but Robin successfully pulled back the duvet and clambered out of bed. He rooted around on the floor for some underpants and two socks. Not a pair, just two socks. He opened the curtains and stood staring out at the world. The world stared back.

A few minutes later, he was dressed and in the kitchen. His clothes were smart, if a bit wrinkled. A bowl of breakfast cereal lay on the table as he stood at the refrigerator with a milk bottle in each hand. He sniffed one, then the other. He sniffed the first again and put it back into the fridge. He poured hard milk onto soft cornflakes.

After a few mouthfuls, Robin decided he was better off hungry. He looked at the hooks by the front door and noted the lack of keys. Why did he never just hang his keys up when he got in? Where did he put them when he got in last night? Was he certain he even had his keys with him last night? He paused, of course he had. How else would he have gotten in? He checked his pockets, cast an eye over the kitchen table and absent-mindedly checked his pockets again. It's OK, I'll just take the spare set, he thought and walked to a very full kitchen drawer. He rooted around for a couple of seconds before he remembered that he had already been using the spare set, since the originals disappeared a couple of months ago. Must find those when I get a minute, he thought.

He searched the house high and low for the keys. He began looking in places he'd already looked, which made him feel faintly ridiculous. He looked in places he hadn't even been yesterday. He looked behind heavy items of furniture that he hadn't moved in years. All to no avail. Pain shot up his leg and he crumpled. He looked at his right foot dangling uselessly and beneath it he saw the sharpest set of keys.

Robin left the house with a battered briefcase and a slight limp. He hoped he could walk off the latter. Some twenty feet above him a seagull emptied its bowels. A white dollop landed squarely on his shoulder. He craned his neck to look at it. It had purple bits in it. From somewhere deep in his memory, he remembered that someone had told him it was lucky to be so blessed. It didn't feel lucky.

He glanced at his watch and realised he was running late. Or rather limping late. He neared the bus stop just as the Number 14 rounded the corner ahead of him, but it might as well have been a world away. It reached the stop before he did and Robin was in danger of missing it. As he sped up to an awkward run, the limp became more pronounced and began to look to all those aboard the Number 14 bus like a stark piece of improvisational dance. This jagged, brittle run brought Robin to a stop at the stop in plenty of time to see his bus sail off into the distance.

He sat on the uncomfortably angled bench at the bus stop. His foot hurt. Some days he felt as though the world was against him and some days he dismissed this as paranoia. Today Robin decided that it's only paranoia if you're wrong. He sighed and dragged himself to a standing position. He looked hopefully at where the next bus was due to come from. Nothing. He looked in the opposite direction along the bus route, sighed again and started to walk along the seafront.

A short while and a short walk later, his foot wasn't bothering him as much. He wondered if this was because it didn't hurt, or whether he was merely becoming accustomed to the pain. He paused. It didn't really matter either way. The sky darkened and took on the same grey as the concrete walls that surrounded him. This is wonderful, he thought as the first few drops of rain came down. He could visualise his umbrella perfectly. It was on the floor by the front door under the keyless hooks. More importantly to Robin was where it was not. At this precise moment it was not above him shielding him from a torrent of water. A torrent which seemed like it couldn't get any stronger and then did. Robin looked at the deluge and it appeared to him that there was more water in the air than there was in the sea.

Wetter than wet, he trudged onward. He didn't notice, but the bird's deposit had almost washed off the shoulder of his jacket. That was as lucky as Robin got today. His destination loomed large in the distance. The shadow of the office block stretched out over the windswept beach. Already the highest landmark around, its pointed spire reached that little bit higher for all the world to see. The windows glistened as rain ran down several storeys. There was a flash. Soon after there was a clap of thunder and Robin quickened his steps. The storm was close.

Water flowed down the wheelchair ramp as he began to climb the steps to the entrance. He knew he was late, but he chanced a look at his watch. He was later than he realised, but he couldn't bring himself to care. He stepped into the view of the sensor of the automatic doors.

An electric field formed in a cloud high above the world. An electrical discharge left the cloud and hit the spike at the top of the building. It made contact for less than a thousandth of a second. The current flew down the building so quickly that it wasn't worth measuring and lights failed on every floor. Bulbs exploded and showered people with glass, telephones fell silent, alarms failed to sound, computers died and the sensor for the automatic doors stopped working. The water on the outside of building boiled.

Robin saw a flash and looked up, but missed all the excitement. He turned back to the entrance as the doors were closing. He stepped into the narrowing gap as it closed around him and assumed the door would 'see' him and open. Instead the doors clamped together firmly around his nose. Try as he might he couldn't remove it. He was trapped. By the nose. The world hated him.

Posted by Dave at 10:00
Email ThisBlogThis!Share to TwitterShare to FacebookShare to Pinterest
Tags: Blogfests, Writing

Hi Dave,
I found you through the hatefest. I can see why you wouldn't want to focus on hate this week. Good luck from the other side of the world!

Poor Robin! I love the details in the story: particularly the water flowing down the wheelchair ramp and the two socks -- but not a pair. I do't know if I've ever had a day quite so miserable, but almost!

Oh! Now that is just a really bad day.

Wowza that is one completely awful day, start to finish! Well illustrated with the details. Poor guy. I guess he's lucky he wasn't struck by lightning too...

Poor, poor guy :-( Great job at making me hate the universe for hating on Robin

Oh no, poor Robin. (Great choice in character name.) You really drew me in. I was with the guy every step of the way and hate (but love) the ending.
Cheers,
Robyn

Murphy was having a field day with poor Robin!! I agree with Amalia, I half expected him to get hit by lightning, the poor sod...

Thanx for the share and for joining my blogfest!

ps. pop in on friday to see who won what book!

And I thought I had bad days! The world sure is taking a dump on poor Robin...

Suddenly my day feels so much better :)

I guess when you tick off the universe it really dumps on you.

This was such a fun read. Thanks for sharing it.

Thanks for sharing this.

My favorite bit was from before the hate really built up, actually, just how he was still surprised that his wife wasn't there when he woke up, even though part of him knew already.

If you get a chance, check out a fellow writer's zombie story and help me make him wear an embarrassing shirt next year! It's the ultimate grudge match between social media and the zombies. Details are here:
http://kelworthfiles.wordpress.com/2011/07/19/prove-the-zombies-wrong-social-platforms-can-build-readership/

Oh dear! Poor Robin was having a very crappy day. I have to admit I laughed when he got pooed on by the bird. Isn't that just the way? Sigh...!